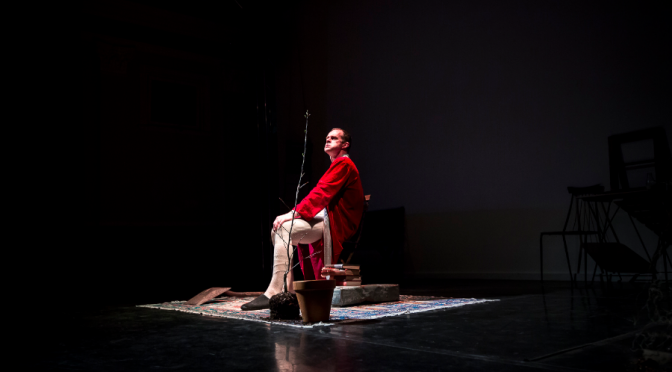 Lean and slippered. The stained figure before us is no hothouse creation. He is of the earth. His modesty is protected by his natural fibre woollen longjohns but he is white faced and stripped of insignia and identifiers. Perceptually naked as the ball root of the plant he holds.

That little tree. In his eye … a son. An object to be threatened into growth when it takes its natural place in a hole of the creature’s digging.

Clockfire Theatre Company will take this being on a journey to a place where the earthen tear he has dug, with his father and his father’s father and back beyond, is no longer owned by him. And in that place, he will beg.

THE NATURAL CONSERVATORIUM FOR WISE WOMEN is a work of power about power: the taking of it, the nature of reclaiming it and the powerlessness of those from whom it is wrenched or cajoled.

Devised by the performers and director (Director, Emily Ayoub; Lead Devisor and Performer Alicia González; Devisors and Performers, Catherine Parle, Laura Turner & Tony Weir) it stunning theatre which might be highly influenced by Jacques Lecoq but, there is absurdism and yet a logical story. Further, there is stillness and freneticy plus there is laughter and heart wounding sorrow. It is not a show to be categorised or defined, this is a production to be engaged with. Intellect and emotions in elevation and a desire to talk late into the night over gelato on King Street.

Playfulness begins the show. There is physical comedy and some very funny lines and expressions as the show inveigles itself into consciousness. Holding up the woe begotten plant, the man speaks to us of his world, a place where a war is outside. It has required him to create some security around him, his gated isolation a protection of time and place.

His ally in this is a boy, no attempt to disguise this woman as this boy. A girl/boy, also stained and who will be bloodied. The boy can break the barriers of the man’s garden to deliver a series of letters from authority figure, La Femme du Jardin. The letters are a reprise. Delivered and despatched in a variety of ways… including the most capitalist, patriarchal way of all. Conspicuous consumption. The man, (Patriarchy? C’est Moi … another superbly rendered reprise), will consume often. In an awe striking and teeth gritting experience for the viewer.

In another subversion of complacent viewing, he speaks in French with surtitles yet Garden Woman speaks in English with French surtitles. The watching and the listening are intermingled, one finds oneself reading the French as the English washes over. The rhythm of the speech and the beats of the movement are presaged by the hitting of typewriter keys in the first scene … like the one, two, three of sticks raised over the drummer’s head to start a band. We tune in to the invisible choreography of action and voice.

This is the togetherness which unites the 60 minutes of this production. The concert of the impelling cohesion of the language and movement sequences, where each tiny twitch, step or head tilt is skilled, graceful and guiding.

“Bring me …” is not just text in Clockfire’s hands. The music (Ben Pierpoint) tinkles overtly and repetitively yet swells with the depth of underscored long phrases which are reminiscent of ethereal strings. The white light (Ryan Devlin) hits him just so and blurs his features as it strikes the clown white of face and hands. All this as the cow ‘brings’ with lumbering delicacy and the heavy lightness of one who must do something despairingly familiar. The moments of silence so well elucidated by the performers. Heads bowed for grace is breathtaking in its simplicity.

There is openness in every one of these movements, a legacy of the intelligent and interrogated nature of accomplished group creation. This type of devising can go horribly wrong. Sloppy and self-indulgent wankery poorly disguised as anarchy, veneered in go ahead and leave we don’t care disrespect of audiences … we’ll tweet about you and call you old. There’s been a spectacular example of this in Sydney recently.

Don’t let others’ poor work put you off seeing THE NATURAL CONSERVATORIUM FOR WISE WOMEN because this is meticulously crafted, accessible and telling.
It can shock though.

Counterpoint an innocent being seduced with lyrical descriptions of paddock and topography. Contrapuntal images engage the intellect all through the work. A child being struck. A lumpen visage … twitching, lost and hidden.

And the fallen man begging for his patrimony and his privilege.