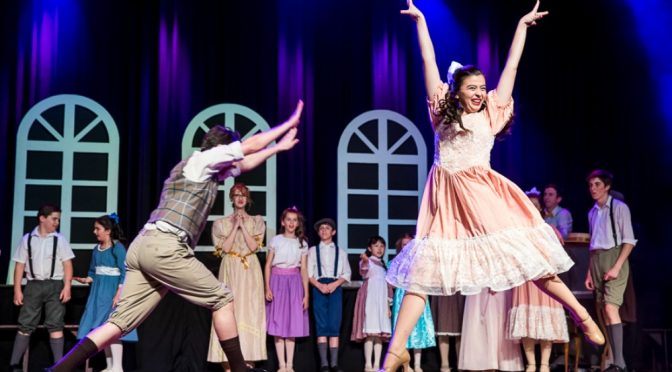 A Broadway hit in 1957, The Music Man made the transition from stage to the silver screen in 1962 with a blockbuster movie starring Robert Preston and Shirley Jones. The original movie and subsequent Saturday night re-runs in the 1970’s of popular Hollywood musicals, helped cement classics such as The Music Man into our hearts and minds.

The Music Man follows fast-talking travelling salesman, Harold Hill, as he cons the people of River City, Iowa, into buying instruments and uniforms for a boys’ band, despite the fact that he doesn’t know a trombone from a treble clef. ‘Professor’ Hill is full of enthusiasm and promises. He encourages the young band members to use a revolutionary mind over matter technique called the ‘Think Method’ to play their musical instruments, while he plans to skip town with the cash. Will he succeed or will love foil his plans and make him respectable?

The opening song Rock Island, in Hornsby Musical Society’s production of The Music Man, heralds an evening of lively, fast-paced and colourful entertainment.

The exceptional orchestra led by Band Director Brendan Flanagan delighted us with familiar favourites such as ‘Seventy-six Trombones,’ ‘We got Trouble’ and the unforgettable ‘Till there was you.’

Elizabeth Dobb and Lauren Oxenham’s direction ensured an energetic and professional show, where the actors looked as if they were enjoying being on stage as much as we, the audience, enjoyed watching them.

Elise Tobin and Alec Green delivered outstanding performances in the lead roles. Alec Green’s talent shone through, singing and dancing with verve as the con-man Harold Hill, performing many commendable songs, such as ‘Ya Got Trouble.’ Elise Tobin’s sweet voice and admirable performance as Marian was topped off by a beautiful rendition of ‘Till there was you.’

There are so many great moments in this production. The ensemble and children’s ensemble kept the audience interested, performing well-choreographed and animated dance and musical routines. The Barber Shop Quartet – Malcolm Green, Jack Crittenden, Daniel Whitehead and David Wotherspoon, entertained us with challenging and difficult harmonies. Stefanie Dobb (Mrs Paroo) charmed and amused us as the concerned mother, interested in her daughter’s love-life. Logan McArthur (Tommy) and Emily Haldane (Zaneeta Shinn), were perfect in the roles of thwarted lovers.

Another standout moment in this production is when Ethan Beattie (Winthrop Paroo) sings his heart out in ‘The Wells Fargo Wagon.’

For a night of brilliant entertainment – go on treat yourself!

One thought on “THE MUSIC MAN : HORNSBY MUSICAL SOCIETY REVISITS A BROADWAY CLASSIC”