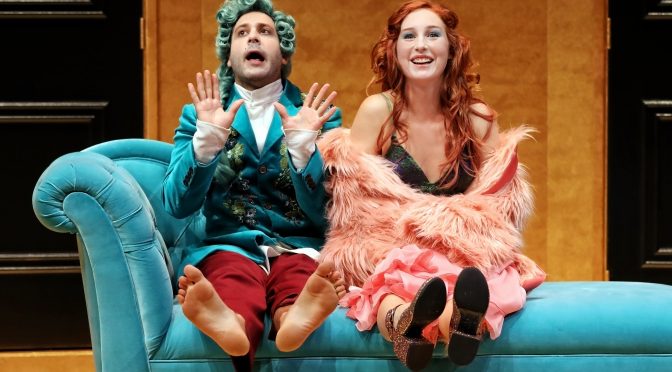 This was just a case of sitting back and  enjoying a night of great entertainment Justin Fleming’s contemporary adaptation, written in verse unlike Moliere’s original play, worked wonderfully well.

Recent Bell Shakespeare productions have been more than a but dark so it was refreshing to see such a bright comedy, not without its message of-course, that being obsessed by money at the expense of other things, can lead to an unhappy and lonely existence.

The play pivots around the central character. magnificently played by John Bell. It’s such a rich portrayal of a  stingy, uptight, egotistical  man who the other characters try to keep at a distance. This battle of wills, like a tug of war,  is  where a lot of the fun in the play resides.  Haragon is determined to have things his way.

At one time Bell does a John Travolta kind of dance move as Michele Doake playing matchmaker Frosine encourages  him on  that he is a virile old man whom Mariane would be delighted to have as a partner.  It’s a great performance by Doake and her bright orange wig and frumpy clownish costume aided in her portrayal.

John Bell’s Harpagon has plans for his children to marry into money with a plan for his daughter to marry an old widower. What  Harpagon doesn’t know is that both his children  have already found the partners that they want to be with.  His beautiful daughter Elise, (Harriet Gordon-Anderson) wants to be with Valere (Jessica Tovey) and his son wants to be with Mariane (Elizabeth Nabben), whom he himself wants to marry. Nabben is great as Mariane, and the look of consternation  she displays as she contemplates a marriage to Haragon says volumes.

Damien Strouthos plays Harpagon’s passionate, good natured son Cleante who is besotted by Mariane and will do anything to win her.

Two of our finest actors,, Sean O’Shea and Jamie Oxenbould, get to play mainly comic, light roles which they make the most of. O’Shea plays Signor Anselm and La Fleche with plenty of flourish, whist Oxenbould plays the shifty Master Jacques who finds himself in tangles of his own creation.

Russell Smith does well in  two roles, the Commissioner of Police and moneylender Master Simon

The play, keenly and tightly directed at a fast pace by Peter Evans, had a farcical tone to it. This was aided by Anne Tregloan’s  wonderful set design with the four doors which people rushed in and out of constantly during the play, and were sometimes peering out of. There was also the sofa which kept on being moved around, with people jumping on it, and cavorting around it,

Tregloan’s vibrant costumes were outstanding and a real highlight of the production.  The glittering shoes which Bell and  Harriet Gordon-Anderson wore really something.  Matt Cox’s lighting design was excellent and Max Lyandvert’s  soft jazz soundscape added to the show’s rich texture.

This was a sparkling night of theatre, THE MISER opened at the Playhouse, Sydney Opera House on the 6th March and is playing until Saturday 6th April, 2019.