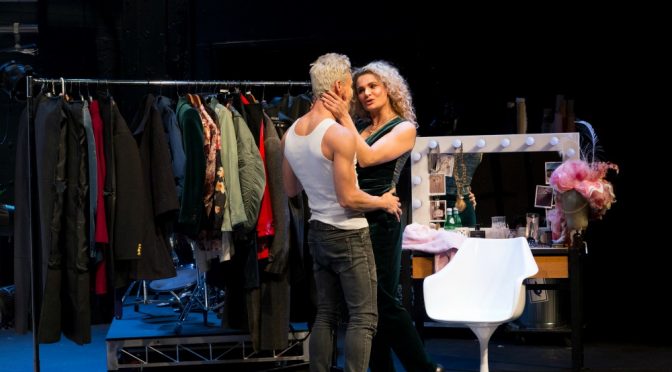 People can come from such different ‘places’ – the way they live their lives, how they perceive the world and interact with those around them – that it keeps people separate even if they want to be together. That’s the  main notion  I took away from THE MISANTHROPE, a Moliere play which has been given a fresh adaptation by prominent Australian playwright Justin Fleming.

Take the two main characters. Alceste is a bit of a loner, serious, a deep thinker, who is always looking for authenticity. Her love interest Cymbeline, is a hedonist and compared to Alceste a little shallow and superficial. She wants commitment. He is flighty, wants to play around, and have the admiration of his peers. The contrast between the two characters is one of the driving forces of a  very character driven plot where the audience ponders on the fate of the petulant Alceste who also has to contend with a serious court case which could go against him.

Justin Fleming has updated Moliere’s play to the current day and has reset it in the music industry. There has also been some gender switching, most notably Alceste, the Misanthrope, was a man in Moliere’s  original play but in this adaptation is a woman and Cymbeline, formerly a man is now a woman.

The play is performed in verse. The dialogue is sharp with plenty of witty ripostes.  There are some light moments in the play which the cast make the most of. The world of the play is a world of flirtatiousness, intrigue, gossip and point scoring and it’s a bit like watching a chess game, as we follow the latest moves made and try and work out the implications. The supporting characters also have their own wishes and desires which they try and act on.

Lee Lewis directs skillfully and the creative team –Dan Potra’s costume and set design, Matthew Marshall’s lighting and Max Lambert and Roger Lock’s soundscape  create the world for the actors to work in.

There were strong performances by a  cast of seven. Danielle Cormack gives a very energetic, generous performance as Alceste who perceives herself as being a bit superior to most people. Her main issue is that she has fallen for Cymbeline and no amount of rational thinking can distract her. He is her obsession.

Ben Gerrard  gives a strong performance playing, for want of a better phrase, the love rat, androgynous pop singer,  Cymbeline. He is a fun loving, glamorous, promiscuous, hip young pop star with plenty of adoring fans. The show features some outrageous scenes with him including a scene with a large unicorn which could easily be a  rock music video clip.

Rebecca Massey plays Alceste’s best friend, lawyer Philippe. She spends the play trying to get Alceste to be more compromising in her attitudes with little success. A favourite scene happens straight after interval when, playing to the audience, she satirises some of Alceste’s mannerisms beautifully, including the way she slumps in the chair when she is talking, and the way she flicks back her hair.

Simon Burke plays Arsenio a smooth, suave businessman who has a soft spot for Alceste and tries to get her to see what a flawed human being Cymbeline is.

Catherine Davies plays Eleanor, Cymbeline’s sister. They are a close brother and sister. When Alceste wants to wound Cymbeline for his unfaithfulness, she thinks of having an affair with Eleanor. At one point Davies poignantly delivers a profound monologue about her views on the nature of relationships.

Hamish Michael gives a very convincing  performance as sincere, soppy singer Orton who has a lot of respect for Alceste, a respect which is never reciprocated!

Michael also plays the character of Cleveland and Anthony Taufa plays Angus, with both men being big fans of Cymbeline.

There was plenty to muse about with this production. A good night at the theatre. Recommended, THE MISANTHROPE, a Bell Shakespeare and Griffin Theatre Company co-production, is playing a one month season at the Playhouse Sydney Opera House playing until the 28th September, 2018.