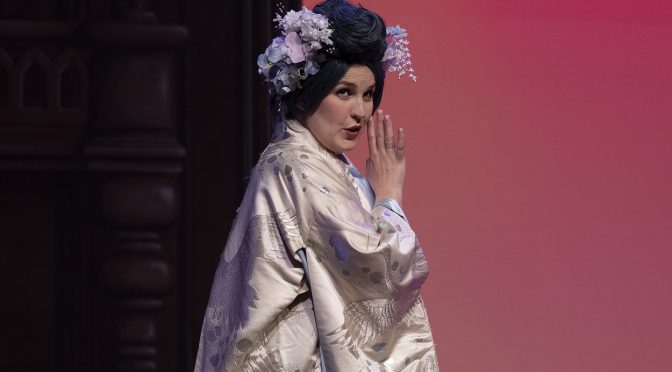 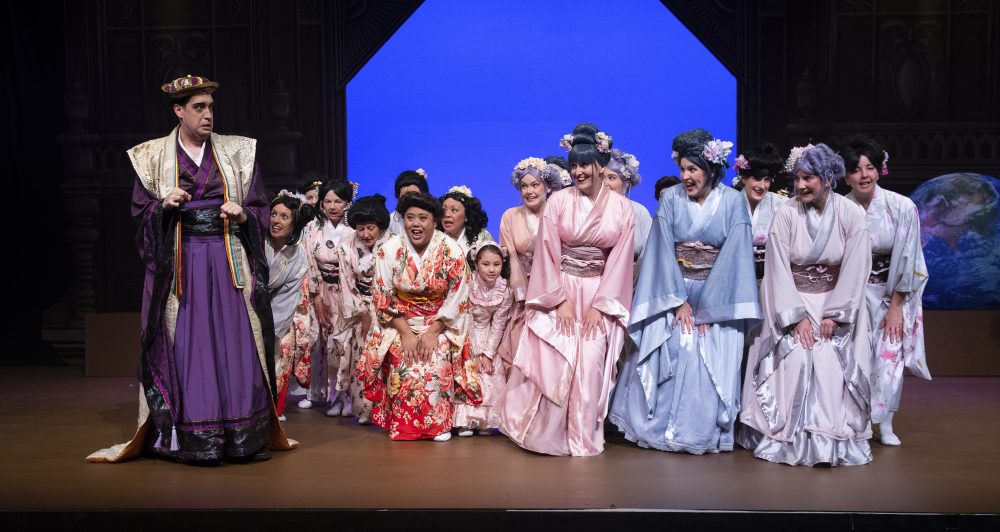 Once upon a time …

This production of THE MIKADO by the Gilbert and Sullivan Opera Sydney , smoothly and niftily directed by Dean Sinclair, is in some ways presented as a Victorian pantomime as it opens and closes with a little girl falling asleep in her maid’s arms in the nursery and dreaming of the events in Titipu , the characters being figurines on the mantlepiece that come alive.

The complicated , twisted plot involves two young lovers, faked death, disguise and arranged marriages plus lots of social and political comment , greed , power and corruption , blending a dash of Aussie irreverence, Gilbertian British humour ,theatrical in-jokes and Sullivan’s glorious music. All gently poking fun at Mother England supposedly in an ‘exotic’ environment and celebrating the craze for the orient at the time it was written.

Close attention to both text and music was respectfully paid. Gilbert’s libretto has been wittily updated by Melvyn Morrow, particularly in Koko’s As some day it may happen – yes he’s got a little list – and the Mikado’s A more humane Mikado.

Musically and vocally it was superb , and delightfully overseen by the elegant, precise direction of musical director Rod Mounjed. Listen out for similarities to , say , HMS Pinafore and The Pirates of Penzance. There is a parody of a madrigal and some very demanding singing required handled with great panache.

Costumes (devised by Sandi Tutt) were spectacular, mostly Japanese with lots of embroidery , brocades and colourful designs. The set design included a huge ornamental vase,  and a turquoise blue box big enough for Pooh Bah and Koko to hide in and Pish Tush to emerge out of at the start of the show. Also featured was a Japanese house with sliding doors. Robert Fox’ s lighting was dramatic and complementary.

The chorus ensemble of ladies and gentlemen gave strong support.

The Mikado was played with imposing, wicked relish by Tobias Page in fine bass voice , spectacular red white black and gold costume and striking makeup. When he first appears it is as if he is rock star or the Emperor with a huge group of courtiers.

Megan Chambers as Katisha channels her Chinese cousin Turandot and is icily cold and arrogant at first, but we see her thaw towards the end .Both the Mikado and Katisha have arresting first entrances when they are wheeled onstage by attendants, standing in what appears to be huge bowls.

Dean Sinclair as Koko,  tailor now Lord High Executioner ,was tremendous and gave a vibrant performance. He was mostly in a marvellous blue kimono like outfit and often assumed a sinuous s-curve position – evoking a Japanese print ?  or referencing Grosvenor in Patience? His Tit-Willow song reluctantly wooing Katisha was most moving.

Nanki – Poo , the son of the Mikado in disguise , was enchantingly played and sung by Jareth Norman .He was dressed rather like a lower middle class British man rather than Japanese style .When he sang A Wandering Minstrel I he had a purple guitar.

Sweet Yum Yum was delightfully portrayed by Anne-Louise Harris . Her The Sun Whose Rays was sung with acute precision and brightness.

Joshua Knight as corrupt, conniving, sneering Pooh Bah had great fun being Lord high Everything Else, rattling off his various duties and positions,  multi-tasking impressively and was in fine voice.

Pish Tush , a proud and noble lord , friend of Pooh Bah , was charismatically portrayed by Andrew Pennycuick .Pish Tush also has a specially written opening speech setting the scene and tone of the operetta.

Much fun was had by all .

Running time : just under three hours including an interval
The Mikado runs at Shore school un til Sunday 13 October2019