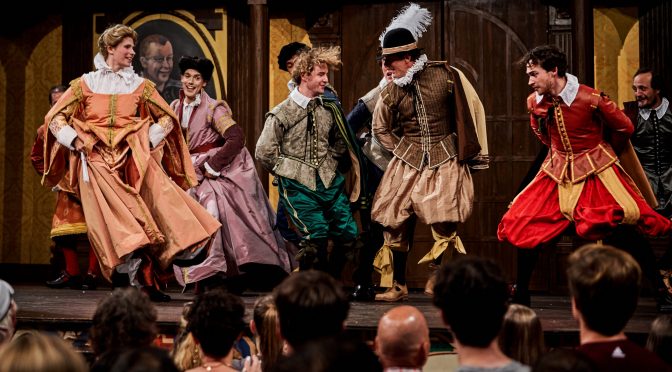 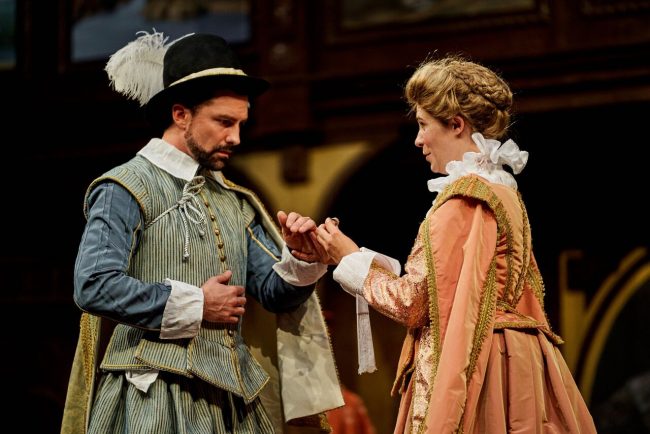 Tissues.  Take tissues to THE MERCHANT OF VENICE performed by Buckingham’s Company at the Pop Up Globe.  Shylock will reach down the centuries to prickle the eyes. Seeing the racism rampant and hoping that 400 years has made change, secretly knowing there is still much to do, will barb and water requiring a discreet dab of the visage.  And keep said tissue handy because, the biggest surprize of all, Portia will fill your nose with snot and eye with tears of joy and laughter.  This production is a splendid manifestation of social consciousness embedded in bespoke theatrical entertainment of the highest, most accessible calibre.

This MERCHANT OF VENICE ranges about the wide, authentic stage with slapstick and pathos, characters broad and subtle and that most onomatopoeic Chaucerian four letter word in direct contrast with the sublime poetry.  There’s so much to enjoy for any audience whether new to the Bard or steeped in the canon.

If investment in a production has a measurement, it is the finale of this all male production where the audience call out their desire for comedy as Bassanio and Portia fight over the ring.  It’s a delicious sound which not based on mass desire for a romantic ending but on what will be the funniest outcome! I was enraptured by the revelation of that moment.  Among many.  Beginning with the beginning.

The men’s business approach to the first scene has a truth in execution which really brought home the layers of ‘dealing’ which is going on here.  The mercantile and the personal conflict with each other in this scene and the sadness with which ennui-ridden Antonio gives Bassanio his credit is so telling. (Antonio: Jonathan Martin; Bassanio: Cameron Moore)

A complete change of pace though as Portia swaggers on with brass and abrasive sass and Nerissa simpers comedically and their relationship cements with a raspberry and a hip bump.  (Portia: Patrick Griffin; Nerissa: Will Alexander)  They are hilarious together, Alexander does a mean sulk and seriously knows how to make an entrance and Griffin has the intricacy of the fan thing down to comic nano-gestures.  And yet both can pull the serious from the silly when required… the courtroom.

Shylock, played by Peter Daubé, has proved himself to be a two faced creation.  Obsequious and sneeringly gratuitous on public display, but physical and accusatory when he speaks direct to the audience, Daubé has bedrocked the character in tradition.  Under the directorial hand of David Lawrence, this choice is requiring of the viewer to make a humanist leap of perception.  To see the modern world in Shylock’s treatment after the production’s promulgation of a stony faced response to “if you prick me” delivered at speed and with whispered murderous intent at the end.

It is also in the courtroom drama that we see the power of ensemble acting to move and propel the emotion and story.  There are some great comic characters and interactions among the Venetians during the show and that character based love and camaraderie travels extremely well to the outrage of the judgement scenes.

And also to the hilarious fun of the after finale dancing, where the terrific music really takes centre stage, despite being high above. Music is very subtly used in this production.  Behind “in Belmont” is a mandolin with a luteish lay bring the poetical and  lyrical to words spoken as dialogue.  Just lovely!  As is the well-used cacophony of drum and trumpet in chaos, the swathe of bar chime for casket openings and the raucous use of trombone and tuba for their entry.

The detail extends to the costuming which is lush and meticulous.  Look for the rings on the Prince of Morocco, inspired shaping of orientalism and personality! Portia looks hot in black and Jessica (Jade Daniels) is ungainly girly in unaccustomed red with five o’clock shadow and all, making the fun between she and Lorenzo (Patrick Carroll) such a romp.  The sumptuousness of the visual is most clearly appreciated in the masque which precedes Jessica’s flight, every costume breathtaking.

THE MERCHANT OF VENICE is the big news on the Rialto.  It’s a don’t miss experience which echoes from 1605 with enormous fun, style and rollick.  And that lingering shudder of worry about what has yet to change.  Highly recommended for young and old.

THE MERCHANT OF VENICE performed by Buckingham’s Company at the Pop Up Globe [Facebook] continues in repertory at the Entertainment Quarter. 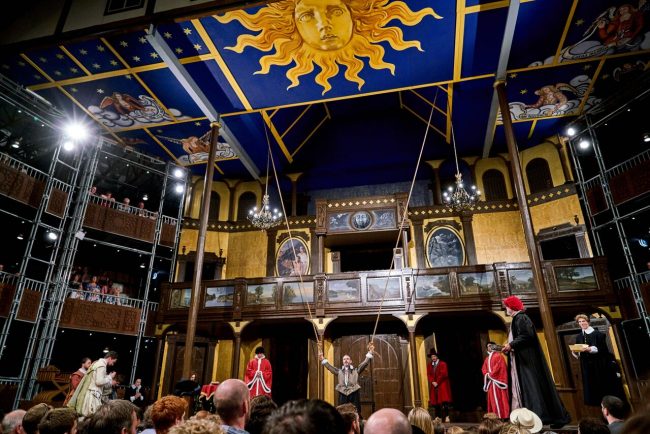