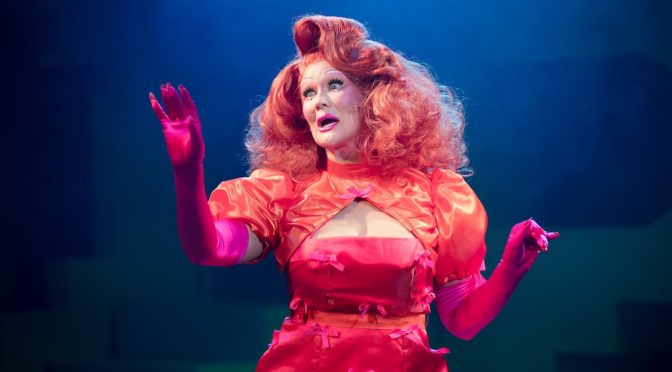 What a great way to start up again with the complete silliness, zaniness, of Mel Brooks.

Not content with making the hit comedy movie ‘Frankenstein’  in 1974 which was listed as the 13th  funniest film ever made by  the American Film Institute,  in 2007 he transformed the movie into a stage musical  which became a Broadway hit.

In YOUNG FRANKENSTEIN  scientist Frederick Frankenstein (it’s pronounced Fronk-en-steen) – grandson of the infamous scientist – travels reluctantly to Transylvania where he has inherited his family estate. Before long, he finds himself back in the mad scientist shoes of his ancestor, and with the help of hunchbacked sidekick Igor and yodelling lab assistant Inga, he brings to life a new creature to rival his grandfather’s. But this time, when the monster escapes – great hilarity ensues.

The show’s director Alexander Berlage in the last  two active year of the theatre, has directed two  hit productions; ‘American Psycho’ and ‘Cry-Baby’. With YOUNG FRANKENSTEIN, the Australian premiere of this Mel Brooks show, it looks like now he was won the trifecta with this show already booking well.

Berlage continues his tradition of reworking classic old (comparatively speaking) shows and getting new things out of them.

Nick Elyard makes for an alarming monster who does however show a sensitive side.

Other performances to catch the eye  include Lucia Mastrantone as the decidedly odd housekeeper  Frau Blucher and Shannon Dooley is outrageously good as Frederick ‘s wife Elizabeth who pledges her love to her husband yet will not let him touch her.

The show ends on an appropriately emphatic note with the cast gathered across the front of the stage laughing their heads off as the curtain slowly descends on them even peeking through the curtain as it reaches the bottom.

Running time 2 hours and 30 minutes including one interval.

Performance times Mondays at 6.30pm, Tuesdays to Saturdays at 7.30pm, Thursdays at 1pm and also matinees on Saturdays at 2pm.