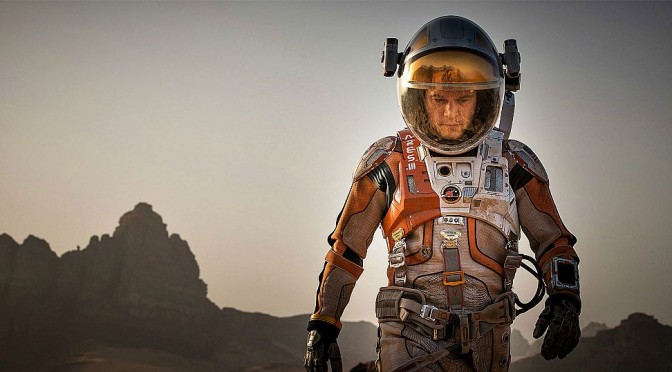 Matt Damon becomes the space age Robinson Crusoe when he is presumed dead and left behind on Mars and struggles to survive and get himself back home to earth in THE MARTIAN.

Based on Andy Weir’s 2011 novel of the same name and directed by sci fi auteur Ridley Scott who gave us Alien and Blade Runner, this is a film that has been best described as Apollo 13 meets Cast Away.
Matt Damon plays an American astronaut Mark Watney. During a normal routine mission on Mars, Mark and his crew are preparing to board their spacecraft to return home. While boarding, a fierce storm breaks, seriously knocking off Watney away from the craft and into the rubble. Believing he is dead, his crew depart and make their way home.

Despite being stranded on the red dry planet with limited resources, Watney cleverly survives by growing his own food and water at the NASA’S Space Base on Mars. He lives off potatoes that he grows himself and reluctantly listens to 1970’s disco music on his crew member’s playlist. Watney’s attempts to contact NASA with outdated communication technology also proves to be a challenge.

Whilst THE MARTIAN does drag on with a running time of almost 3 hours, it still entertains, even with the obvious ending. The visuals in the film are breathtaking. The terrain and landscape of the Red Planet looks very realistic. All of the scenes of Mars were filmed in the Jordan Desert.

The film is more technically accurate and enjoyable than the disastrous Mission to Mars and The Red Planet.  If you liked 2001: A Space Odyssey and Gravity, you should enjoy THE MARTIAN.

THE MARTIAN is now screening in cinemas.