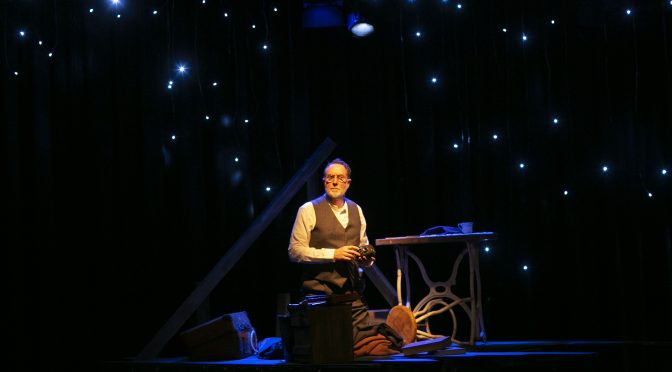 It is late in the war in Northern Germany when Anna Moller finds a man at death’s door in a forest near her home.  With her husband, Hermann they take him to their attic, steal his wallet and nail the trapdoor shut. When Daniel wakes he is in a precarious situation as the Moller’s have discovered he is a Jew.  Conflict arises with Anna wanting to keep him safe and Hermann not willing to risk it.  When they discover that Daniel has a skill that they can use in the bartering economy of the dying state, Hermann becomes an entrepreneur in the Black Market.  Nosy neighbour Frau Giesling is also in for a cut. When the war ends there is even more scope for Hermann to make money from Daniel’s work and the pair decide not to tell Daniel the truth.

Written by Timothy Daly, the text of THE MAN IN THE ATTIC requires a direct engagement by the audience as the characters often speak out directly with a “we”, “I” and sometimes, a disconcerting shift to a third person “they”.  For these events are based on a true story.  The pair were tried but few records remain despite Daly’s extensive research.  Imprisonment stories have been told before but here, because all four characters speak directly to us, and as trained theatre audiences for such theatrical conventions, we believe them, there is a lack of tension in their situation.  This certainly gave me the emotion-free, licence for imagination and analysis.  And to my eventual discredit … judgement.

Particularly of Hermann who in Gus Murray’s interpretation is smarmy, insincere and, in his character’s misplaced humour thrown at the audience, it is evident that Hermann considers himself charming.  It’s a clearly elucidated character if not especially engaging.  One which left me asking whether he was innately venial or made that way by experience.

Very well expressed is Danielle King’s Anna.  She subtly exhibits that conflict between Anna’s better, empathetic, sympathetic self and her self-serving weakness and also the staunched desires of a woman unfulfilled.  She shows a love for Hermann that feels real despite his lack of reciprocation and bullying behaviours.  Her moments of growth as she finds herself drawn into discussions with Daniel are very touchingly brought out.

In Daniel we have an excellent performance from Barry French who brings considerable colour and variety to a character who could be read in one note passivity, somewhat indicative of a cultural worthiness.  Apart from French’s technical excellence in the small space, his absorption in tiny tasks is brilliantly wrought, he brings a variety of nature to his character.  Daniel speaks most often to Anna in a warm and generous tone which is reflected but not repeated as he reads from his journals.  He is wary with Hermann and his work in the ‘building description’ scene is so light and characterful as to really highlight the bonhomie that Daniel might have had in the before time.

The other character is Frau Giesling. There is a knowingness to the bigotry of Colleen Cook’s initial entry and I was very struck by the poignancy of behaviour between a woman protected and a woman alone.   A man saying “best sex I ever had” does not really indicate consent and that scene is thoughtfully directed by Moira Blumenthal who has conceptualised the production with an appreciable vision.

The imagination is beautifully stimulated by the evocative set from Hugh O’Connor which has a meta resonance of peril as the Daniel character is trapped very high above the stage and with little solidity inherent in his platform.  A quick mention of his costume design also which is practical and expressive, the implications of the grey striped shirt in the washing basket a powerful detail. The decay is not overdone, the delineation of what is able to be heard where is physically well conjured but with the set being so far forward there are all kinds of problems with the lighting design (Emma Lockhart-Wilson) which often misses the mark in colour and throw.  Most evidently by the distracting glare of the wash over the front few rows of audience.

Tegan Nicholas’ sound design, however, hits the mark exquisitely. Technically, the wireless audio is well created for verisimilitude and the speaker travel of the trucks’ entry very well designed.  As is the interpolated music for emotion, especially the modulated, hopeful and gentle light piano under Daniel’s journal reading.   I also loved the uneasiness of those lengthened notes under the army arrival.

There are some very lyrical sections in this play that stimulate the senses without bringing in an unnecessary sentimentality.  Hermann’s evocation of the fire is chilling in its matter of factness and Daniel’s journal entries speak to a longing in all humankind.  For this is a big picture story written in a small space.  Were we imprisoned by forces political and practical what would be our response?  THE MAN IN THE ATTIC allows an audience to explore that in themselves by telling a true story in true circumstances and I, for one, am very concerned at what the plays says of me.

THE MAN IN THE ATTIC from Shalom [Facebook] supported by Darlinghurst Theatre Company [Facebook] continues at the Eternity Theatre until July 22nd.  And you can read an interview with Director Moira Blumenthal here. 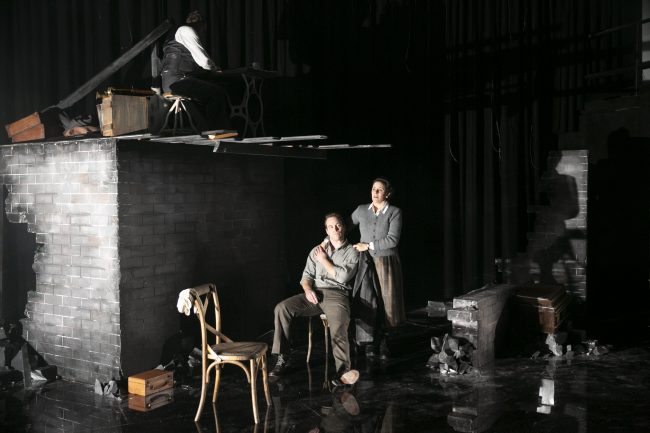