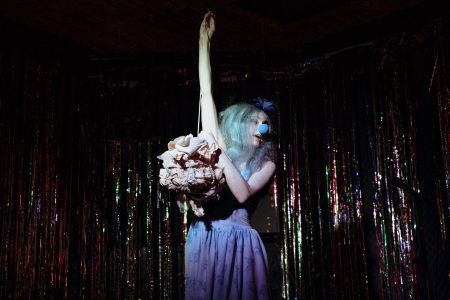 As Mr Cheesehead introduced the show you know you are in for fun night. The huge wedge of fake cheese on the character’s head is a bit of an indication that there is no need to take things too seriously. The Lost Lost Cabaret was performed in a small upstairs bar at The Forresters Hotel and the audience contained vocal and enthusiastic fans of cabaret. The artists encouraged and responded well to the audience, adding to the fun of the evening.

The first guest is a flamboyant juggler Daniel Gorski. He jokes and horses around through his routine with his uncle’s collection of boxes and eventually displays some impressive juggling skills. The next act was Richard P Dick, playing a character reminiscent of Roberto Benigni as Leopoldo Pisanello in To Rome with Love. Sherriff Ian Nottaham espoused the joys of veganism and peoples’ reaction to it. He charmingly encouraged the audience to sing along about becoming comfortably vegan. Heidi Hilliard entertained the crowd performing a magic routine with metal rings to the sound of The Motels Total Control, an excellent song to choose. A highlight of the night was The Whalerider, an extraordinary routine performed with whale song. The audience quickly learnt to sing in whale and enthusiastically participated. Irish Steve completed the evening with an amusing meditation class, something rarely encountered in cabaret. Steve also provided musical accompaniment for the evening and technical support.

The Forresters Hotel, corner of Foveaux & Riley St, Surry Hills. The area is a little enclave of pubs and restaurants a short stroll from Central Station. This was The Choo Choo Troupe’s last show at this venue this year. If you are looking for some fun entertainment keep an eye out for this ensemble. 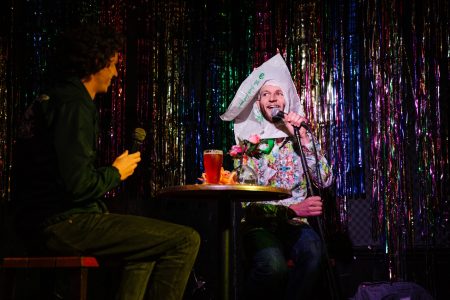