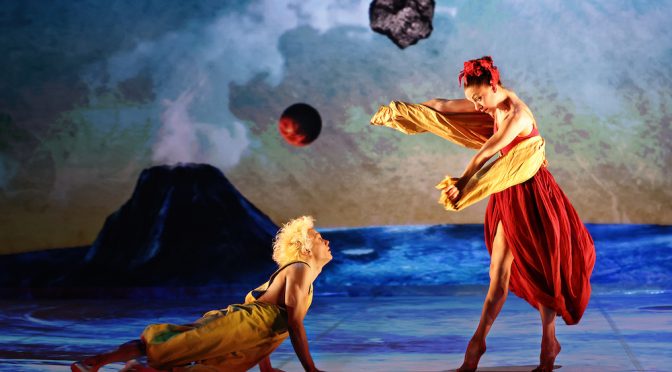 Thanks to Anne Tournié (Choreography and Direction) and Chris Mouron (Adaptation and Co-direction) for bringing a work of such joy and hope to our city. More than a revival of the iconic French children’s tale, this production was the very embodiment of the literary work. It is the production that matched the 1945 publication to perfection. More so than yet another representation of the printed story, it is its full realization and completion. On stage the imaginary, emotional world of a child is perfectly manifest. This is the world Antoine de Saint-Exupéry intended,  the subjective collage of a child’s imagination that cannot be written down. “What is essential is invisible to the eye” de Saint-Exupéry might have said, but in this theatre what is essential can be seen in all its wonder.

The production is a dance/circus work, layered with live narration and song by the finely tuned and attuned voice of Chris Mouron, exquisite surrealist and composed videos by Marie Jumelin, an array of rich costumes (Peggy Housset), and a rich incomparable soundscape by Terry Truck. The stage become a mobile panorama of the imagination, with images all over the floor and rear cyclorama, and lighting (Stephanie Fritsch) matched in style, shape and colour.

Above all it is the talented dance ensemble who thoroughly earned the magnanimous standing ovation from the opening night audience. Lionel Zalachas as the Little Prince dazzled throughout in free spirit, from the ceiling, the floor, on a ball, in acrobatic solos and in several delightful duos. The full array of heavenly characters – mainly satires of adults through a child’s eyes – are on stage, each a melodramatic evocation based on quirky humour that reminds us never to underestimate a child’s vision of the world he or she is in. The Insatiable king and the avaricious Businessman (Luca Cesa), the obsessed mathematician, the narcissist Vain Man (Mathieu Cobos), the hyper Lamplighter (Marcin Janiak), the Drunk and also the Railway Switcher train-spotting neurotic (Riccardo De Totero) – these would be funny enough as Gilbert and Sullivan roles.

However we need remember that the book about a flier (Aurelien Bednarek) who crashed in the African desert, was written during World War 2 and published in 1945. The story, of a young boy’s hope and love for his rose (Charlotte Kah), and three midget volcanos, on his little personalised planet, struck a nerve in the war fatigued French, and in our terms today, went viral. There is a sombre edge to depictions of power, avarice, science, drink and drugs, death (the Snake-Srilata Ray) for a European world that had been largely destroyed.

(One need not ask if the depictions of adult shortcomings have any relevance to the city in which this production was staged. That is an entirely different plot.)

The Prince tames the Fox (Dylan Barone), the wildness in humanity, and sets up the possibility of peace on earth before he himself is killed by the snake. The image of the Prince and the fox shoulder to shoulder, staring at the night sky backs to audience, is a particularly memorable one – the earth and the heavens at peace.

It is no wonder the story has been enjoyed by all ages – children and adults have found different levels of engagement in its apparently simple journey of fantasy.

75 years after publication (in liberated France – it was available two years before in England), and 140 million sales and 300 translations later,  just when one might wonder if the legacy of The Little Prince might be waning, along comes thus production, and surprise, surprise, with of the moment technology at its disposal, this production proves the sheer embodiment of the original first edition – it as if this theatrical realisation was what the original book (script) intended.

Well known quotations, extolled so clearly at the shows’ end by the indefatigable narrator, resonate for all age groups and for all ages.

“All grown-ups were once children… but only few of them remember it.”

“Only children know what they are looking for.”

“It is the time you have wasted on your rose that makes your rose so important.”

One must add, that the producer knows their game, with complimentary (lavish) programs for all media (essential for media). The program is a publication in its own right, and worth purchase whatever it costs.

At interval from the Opera House balcony, the almost full moon breathed deep on the city to the east, after its fantasy show the night before. One could almost wave to life-force above, as stars seemed reflected in the dark waters in earth, and the epithelial arched tissues filtrated mysteries of the black sky it graced. And when the epiphany within had finished, and during applause, who was that quiet aged man in a jacket just up the row? Was he crying? There were children throughout the rows. To paraphrase the book, if a child comes to you (or an ageing author), send a word immediately that he has come back, bringing a tale of peace and hope for the earth when most needed.

THE LITTLE PRINCE is playing the Joan Sutherland Theatre at the Sydney Opera House until Sunday 6th June 2021. The show runs for 110 minutes with one twenty minute interval.