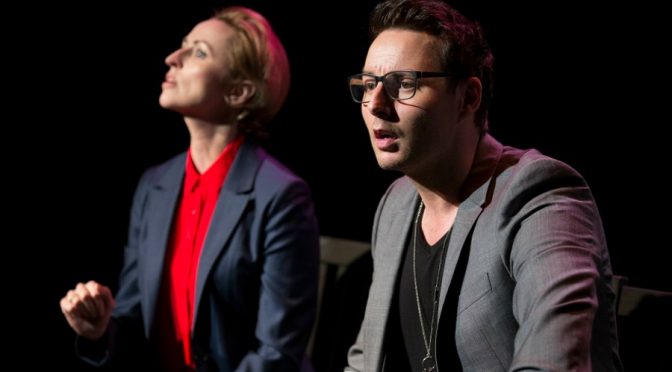 Mitchell, who is seriously pissed in a hotel room, hires Alex. Things do not go well initially but in the morning there is the distinct whiff of a disastrous amour fou. Diane will need to balance bedings with the bravura public performances keeping Mitchell’s sexual orientation firmly cupboard-locked. She gets it: she’s a fixer … and a lesbian …so rely on her to get things done. Ellen is a party girl and knows what it means to be dumped, still this is a new one even for her.

The play is by Douglas Carter Beane who is best known for screenplays and that particularly obscure art of ‘books of musicals’ – a category for which he has been Tony nominated and awarded. THE LITTLE DOG LAUGHED is from 2006 and it’s best to remember that, though this production does have the occasional ‘freshened’ line. Some things don’t date though and there are constant and hilarious entertainment industry references and gay community observations. Best not, perhaps, to think too much about how little has changed. The art of the wordsmith never goes out of style and the text is marvellous.

Sarah Aubrey as Diane pulls the words kicking and screaming off the page to hurl at the audience and there is no ducking away. They just keep coming. Her pacing and her ability to freeze frame a gesture or a neatly summative facial expression is marvellous. In a superbly controlling performance Aubrey makes sure we only see the surface of this character. Diane is not about depth. Just drive and devotion to her client and to herself. She speaks directly to us in a warm yet icily dykey kind of way.

As Mitchell, Brett Rogers is Aubrey’s equal. The duo have terrific rapport from the first time we see them and have several lovely scenes together: scenes where an overwhelming Diane would destroy the comedy. Just one example of the steady directorial hand of Alice Livingston. This cat and fiddle tag-team repartee is a masterclass in give and take acting.

Rogers also has really engaging physicality which he uses to effect. Spread out drunkenly on a bed or self protectively disguising his star power, he is dashingly snippy and just a titch sissy. He’s really fun to watch in the fluffy bits but his work in the more meaningful sections about identity and morality also has truth. To the LGBT community these themes are vital. Rogers takes them on full frontal and does a great job.

Also front and centre is Charles Upton as Alex. The role of Alex is very difficult as written, his declarations are clouded and his reasoning tenuous. He doesn’t have the kind of comic lines that that Diane and Mitchell have to endear him to an audience. It’s tough and Upton seemed to be victim to some opening night nerves when we saw the production. Initially, a little stiff with fists stuffed too often in his leather jacket, there were, however, clear indications of how well he will grow into the role. His ability to portray the pragmatism of Alex and his conflicted behaviour around Ellen are well expressed. When he sits on the steps at one point and speaks longingly about Mitchell, the sadness and emotional impact reached gently over the footlights.

Also taking time to settle on opening night was Madeline Beukers as Ellen but she too had hit her stride by the climactic scene and was irrepressibly fluffy and excitable.

That particular scene was also notable for how the production elements came together. The unifying use of dark colours shows up brilliantly in the centre page photo of the program and I loved the way Costume Designer Famke Visser didn’t contemporise the costuming too much. Set Designer Tom Bannerman’s multilevel staging works incredibly well as does his use of scrims, the grey industrial panelling and a pelmet type suspension to define the space. Louise Mason’s lighting blends nicely and I appreciated her limiting of the colour palette and speed in the nightclub scene where garishness might have been a temptation. Similar seamless design from Sound Designer Michael Huxley. (I loved the Adam Freeland ‘Fever’ at interval!)

Presented as part of the Sydney Gay and Lesbian Mardi Gras 2017, THE LITTLE DOG LAUGHED has cattiness, a hint of fiddling, bovine belly laughs and the intriguing question of whether the dish and the spoon will really run away together and get the last laugh. A terrier giggle, a Dalmatian rollick, a spaniel chuckle however you look at it… it’s a delicious entertainment.

THE LITTLE DOG LAUGHED is playing the New Theatre until March 4.

One thought on “THE LITTLE DOG LAUGHED : WIT AND LAUGHTER @ THE NEW”