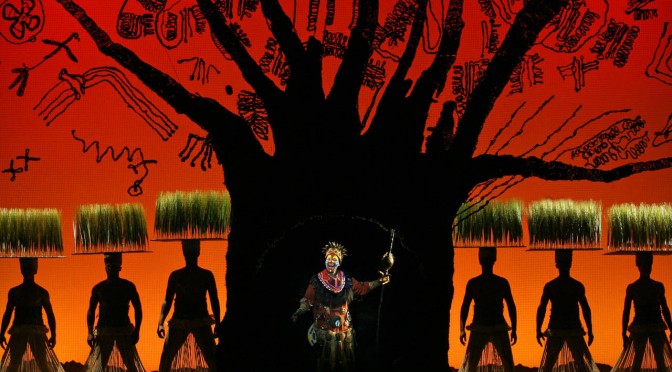 Simba is back! He has returned to Pride Rock ! ( aka The Capitol Theatre  ) . Bold ,bright and colourful , based on the Disney musical film and with help from Elton John  and Tim Rice the production uses African designs ,rhythm and choreography to tell the dramatic story. Its plot is sort of Hamlet- ish – the young prince Simba must learn to overcome his guilt and grief and reclaim the throne from his evil , usurping uncle Scar and his hideous trio of hyena henchmen .Does he succeed ?

Sydney ‘s  revival  is the 10th production of THE LION KING running concurrently around the world, with shows on Broadway and on tour across North America, in Tokyo and on tour in Japan, in London’s West End and on tour throughout the UK, and in Hamburg, Madrid and Sao Paolo.

Visually the staging is breathtaking , with stunning lighting and some nifty use of c-g-is. It is worth the hefty ticket prices for the magical opening  alone , with the arrival of the herds of animals ( elephants , giraffes, gazelles … ) for baby Simba’s ‘Presentation’ through the stalls  .. Thrilling. Choreographically it was a combination of traditional ‘African’ dances , refined animal movements , contemporary dance and also included hip hop and some martial arts moves. There is fabulous use of puppetry and masks throughout  – some Kabuki inspired , like the ribbons of tears for the female lions. One of the most unusual aspects of Taymor’s costume designs is the way it emphasizes rather than conceals the actors’ human physicality in some ways : the lion masks worn by Rob Collins as Mufasa and Josh Quong Tart as Scar, for example, are perched atop the actors’ heads except when the lions are hostile and angered , when by graceful movements of their shoulders the actors can cause the masks to slide down and extend. Timon’s ‘human operator ‘ is in green , while Zazu’s  is in pinstripe suit and bowler hat like a vaudeville comic businessman.

Amongst the show’s many striking visual tableaux is an eerie moment when Scar ascends a pile of skeletal elephant bones , Tart’s haughty mask extended on its spine-like support as though to indicate the wicked usurper’s delicate hubris. Another visually stunning coup d’ theatre is the wildebeest stampede in Act1 that becomes quite terrifying.And the  cast as swaying tall grasses , and the way the cast become prickly pointed cacti … the list goes on

All singing , all dancing the entire gigantic  ensemble cast is excellent and exuberant and has representatives from Zimbabwe, China, Thailand, Malaysia, the Philippines, Jamaica, Puerto Rico, Brazil and the United States in its ranks.

Rafiki , the shaman like narrator mandrill who opens and closes the show, is terrifically played by Buyi Zama . Rob Collins is tremendous  and in fine voice as Mufasa , Simba’s elegant , regal  father . Tart as the malevolent ,evil , scheming and plotting treacherous Scar was chilling – a thrilling villain. Cameron Goodall as the concerned , fussily responsible hornbill  Zazu , sort of high chancellor , was flutteringly excellent and funny . Simba’s two friends in the jungle Timon , a talkative meerkat ( Jamie McGregor) and Pumbaa ( a fat ,smelly  purple warthog ( Russell Dykstra) ) are joyously portrayed.  Both the young and adult Simba and Nala are delightfully portrayed .

The orchestra ( both in the pit and the extra drums and  percussion either side of the stage) under the leadership of  Maestro Richard Montgomery  was tremendous, the infectious rhythms making the audience bop along in their seats .

A worldwide ’ roaring success’ ,this is a superb revival  of the much loved Disney show , transferred  from screen to stage , that had an ecstatic audience cheering in its standing ovation. Fresh and exuberant , THE LION KING’s  broad visual brushstrokes create a  sweeping panorama of a continent in dignified motion and a deeply felt celebration of life.It is a pulsating , gloriously imagined , hugely rich spectacle , a nifty synthesis of global avant garde theatrical techniques  that enchants both young and old. Go on ,treat yourself .Again.And experience The Circle Of Life.

Disney’s THE LION KING  is currently at the Capitol Theatre selling until June 29 .