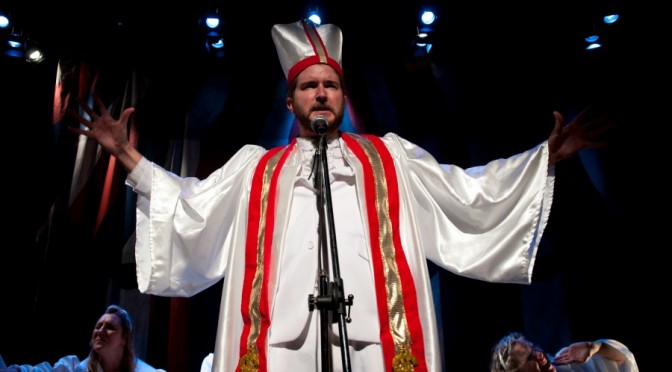 In Act Two of THE LEGEND OF KING O’MALLEY the main character strikes trouble trying to charm his way into the early 1900’s Labor Party. The devil on his shoulder advises him, “Less matter, more art”. That’s what he does to win them over. This set my theatrical brain to wondering … should this restaging of a silly and powerful work, balance matter and art or should it strive to be one or the other?!

Based on a possibly, somewhat, could have happened in parts kind of truth, the show tells us of King O’Malley. A Tasmanian politician elected to the Australian Parliament, O’Malley so obfuscated his origins that maybe he did sell his soul to the devil as we see in the first few scenes of the play.

He was big, he was brash, he was American and he was here. A Kansas evangelist at some stage, married to Rosie who died of tuberculosis, King arrived in Australia by crashing onto the sand near Rockhampton. On making his way to Melbourne… a preparation for Hell, apparently… he exhibits all the signs of having an inconvenient conscience.

His interests are expressed in the Beauty Pageant which closes Act 1. A Commonwealth bank, a national capital, agriculture, mining and the arts. It is this leaning towards the right activities in the left which kills any hope of his ever being PM. He falls out with Billy Hughes over Conscription, loses his seat and at 99 years old, loses his fight with the tuberculosis caught from his wife so long ago.

The original cast members have become Australian Theatre Royalty and this show hit the stage running in 1970. Artists like Kate Fitzpatrick and Robyn Nevin with John Bell directing introduced a vibrant, big, non-traditional, and offensive show when it toured Townsville where I saw it first. Written by the enfant terrible duo of Michael Boddy and Bob Ellis, it was larrikinism elevated to art.

This was at a time when my parents were inflicting My Fair Lady on me … again. I was desperate for a ‘happening’ that reflected my hatred of the Vietnam War, my first International Women’s Day and listening stoned to Tommy under an orange parachute in my friend’s squat. And I’m not the only one who remembers it fondly as part of an awakening of what live theatre could be and do.

There was a lot of nostalgia in the audience tonight. My companion and I have been friends for 45 years from those Townsville days and she never saw it then. Banned by her Catholic parents, you see. So many people at Interval and afterwards were able to reminisce about their first viewing. Sadly though, THE LEGEND OF KING O’MALLEY is not what it was. Too many of those radical ideas, like breaking the fourth wall and coming into the audience, are used routinely today. They are no longer thrilling and confronting.

However, the themes are still relevant and director Phil Rouse has thoughtfully introduced some new elements to modernise it. The old incarnation had a traverse stage and Rouse enlists the steep stairs at the Reginald Theatre to replicate that. Also successful is update of Act Two into a Kurt Weill inspired nightclub. It is a modern contrast to the white robes of the evangelists who take up most of Act 1. The characters still speak impolitely and impertinently of the past and of their betters and they espouse lefty ideas like women’s and indigenous rights. Unfortunately we spend too much time with them.

The cast are onstage as the audience arrives and there are a lot of ‘Hallelujahs’ and forced prosleytisation as they mill around waiting for the seats to fill. The cast of Oliver Coleman, Brianagh Curran, Alex Duncan, Matt Hickey, Andrew Isles, Tata Rankine and Jess Tanner vary in their ability to hold attention for such a long period. Some are too loud and focus pulling and some passive and lost. They really need to burst onto the stage in joining James Cook as King O’Malley. Act One is just too long with all the extra time spent with the revivalists. But the audience gets to throw stuff and that’s fun.

O’Malley, Mr Angel and Billy Hughes are terrific characters and they have clear through lines and motivation but when the ensemble gathers it is neither a cohesive chorus nor are their recognisable, individual characters. Despite their energetic and enthusiastic engagement, the performers are better when they have lines and purpose. It is pure high energy all the way through though. Until near the end when we encounter a different play altogether.

The two monologues by Hughes and O’Malley on the topic of Conscription are the highlight of the show. An audience is mesmerised by a man and microphone in a spotlight. There have been silence and freezes used successfully to make points all through the show but this is spellbinding. I mean, who cares about Conscription? The words are about that but the meaning is what we go to the theatre for. The art is making the matter.

There is terrific piano playing for the songs which range from the foot stomping and hand-clapping to the sleazy and lascivious. A suitably red, white, and blue colour palette in the set and costumes and a warm, traditional, uncluttered lighting design are featured. Tonight there were audio problems but they will be sorted out by the time you see it.

The production company, Don’t Look Away, has the stated aim of being excited about bringing Australian classics back and they have made a well-received start. I am keen to see what they have in store for us next but I could not help but feel this was like the slow dusk of the Wilfrid Owen poem read during the show and now there should be “a drawing down of blinds” over THE LEGEND OF KING O’MALLEY.

THE LEGEND OF KING O’MALLEY is playing the Reginald Theatre at the Seymour Centre until Saturday 13th December.