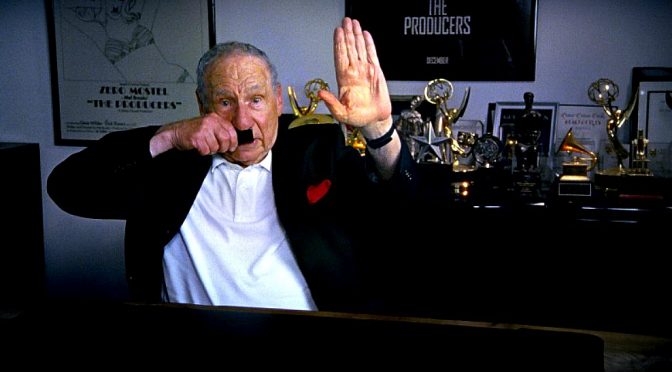 I suggest that it is an integral part of human nature to postulate theories – Why is such and such the case, how do we feel about it, is what we are doing right and so on…?

This admirable quality is what New York filmmaker Ferne Pearlstein taps into with her documentary THE LAST LAUGH.

Essentially what Pearlstein does is to question a whole range of people, many in the entertainment industry and arty people,  as to the their theory/theories about humour. Along with the interviews came plenty of archival footage from television shows and movies.

Pearlstein comes to the film from a particular angle – she wanted to explore the Jewish experience and approach to humour, in particular in its response to the horrors of the Holocaust.  She does this well, exploring in depth, with extensive interviews with Holocaust survivors as well as literary types.

I found THE LAST LAUGH fascinating and should have broad appeal. It gives audiences so many interesting theories and perspectives to mull over and discuss later. Here’s just a taste…

Mel Brooks described comedians as ‘our conscience and society needs to give them a wide berth.’

Another commentator described how the best targets for comedians are major authority figures who can be deftly lampooned. A case in point is archival footage depicting Charlie Chaplin as Adolf Hitler bouncing a plastic globe of the world in the air.

Whilst Mel Brooks said that he found it impossible to tell jokes about the Holocaust, other Jewish comedians were captured doing so such as the brash New York comedienne Sarah Silverman’s : ‘What did Jews hate about the Holocaust? The cost!.’

One interviewee described how he had read all the great philosophers to find some answers to life and he had concluded that, ‘The only way that I can deal with the harshness of life is to laugh at it.’ Another spoke about how being able to laugh is one of the abilities which humans have that separate us from the animals.

The classic dryness of Jewish humour came across so well in the film. The famous scene from the Jack Benny show is screened where a thief confronts him with a gun and asks him, ‘Your money or your life?’ Benny hesitates and then replies, ‘I am thinking about it.’

Author Hanala Sagal  tells the joke where a mother is talking to her child – ‘For you I lived through Hitler, and you can’t even make your own bed.’

The film’s title comes from a comment made by a Holocaust survivor – ‘Everyone who survived the Holocaust became part of a survivor community. We all resolved to make the most of the rest of our lives…to have lots of celebrations including barmitzvahs and wedding…because if we didn’t it would have felt  like we had given Hitler the last laugh’.

The film’s verdict is that Hitler thankfully has not had the last laugh. Whilst some survivors have been unable to escape the darkness, ‘I don’t live in the shadows/The shadows follow me’…many, like Renee Firestone, whose interview features prominently in the film, have remained positive and vibrant.

The film ends poetically. It is late in the day and the camera shows Renee and her husband walking in the city. They discuss the beauty of the sunset, and they remark how pleasant it is that the twilight lasts for some time.

Pearlstein has chosen a great subject out of which she has made a captivating film. THE LAST LAUGH was an excellent choice to close this year’s Jewish International Film Festival.