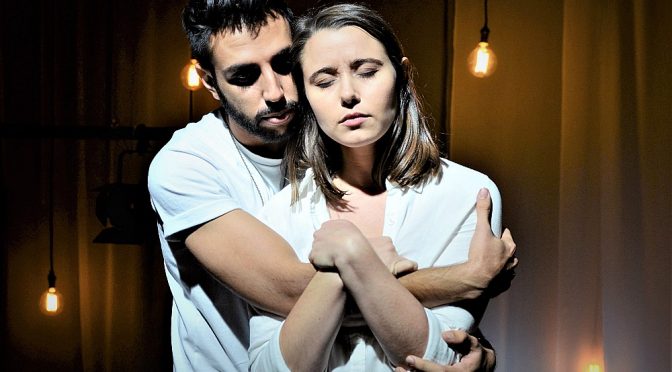 Dinner is waiting. Come with an open heart and mind to the resplendent, heavily laden table. This production by bAKEHOUSE Theatre company is superb, beautifully crafted, written and acted by a largish, strong cast of twelve and is sensitively directed by Suzanne Millar.

Be warned, this production is quite intense and divisive and features explosive inter-generational and racist remarks and quarrels.

THE LADEN TABLE is set in Sydney, right now, and is extremely timely, making us question our own faiths, principles and beliefs. From ‘both sides’ we  hear a plea for understanding.

Some six authors have been involved in this project/work and it has been through several years in development.

At the two dinners we meet three generations of  two very different families.

For the Fishmans, Abe (Geoff Sirmai), a Holocaust survivor, who refuses to forget, presides over his son, Jacob’s (Donald Sword) and wife, Esti’s (Abi Rayment) meal after Yom Kippur, in the presence of the next generation of adult Jewish children who strongly identify as Australian: their daughter Ruth (Jessica Paterson) – a doctor recently returned from a stint in Israel; Daniella (Justina Ward) and young family friend Nathan Gutman (Doron Chester),  in love with Ruth.

Meanwhile, in the Muslim household, Zainab Ka’adan (Gigi Sawires), who is a survivor of Nakba, the 1948 Palestinian exodus, heads her son’s, Ibrahim Ka’adan (Monroe Reimers) and daughter-in law’s, Nadya’s (Suz Mawer) celebratory meal for Eid, together with the adult children who also regard themselves as Aussie : Mousa Ka’adan (Mansoor Noor) – an engineer, recently returned from working in Haifa, Israel; his younger sister, Yasmina (Sarah Meacham), and a Christian family friend, Zac Thomas (Alex Chalwell).

The two families occupy the same table in director Suzanne Millar’s staging but exist in separate spaces. Benjamin Brockman’s marvellous lighting with the numerous hanging light globes provides dramatic atmosphere for all the play’s fluid scene changes, and adds. Sound design by Will Newnham also adds to the finely nuanced atmosphere, especially when prayers of both faiths are fused in harmony.

With its  vibrant and coherent narrative, THE LADEN TABLE addresses profound issues in a very affecting way.

We gain insights into how laypeople of Muslim and Jewish faiths view their everyday oppression and how this can turn into hateful behaviour and beliefs.  War is happening overseas but in these two Australian households, we catch the aftershocks of the Israeli-Palestinian conflict, and the devastating sense of mortal danger faced by millions is far more than a brief news item.

Both families are trying to make sense and find a way to living within the modern world , with mobile phones ringing at awkward times, whilst still dealing with explosive centuries of religious discord.

In some ways this play can be considered a modern day Romeo and Juliet story, a love affair that crosses social and religious barriers, because Mousa and Ruth met in Haifa, fell in love – and now Ruth is expecting a baby .

THE LADEN TABLE  has no easy answers, still the plays ends on a note of hope-  Esti and Nadja light candles,  and there is talk of,  ‘we will get through this’  and ‘there is a baby!’.

Intense and powerful, this thought provoking play will give rise to much discussion afterwards.

THE LADEN TABLE is playing the Kings X Theatre until 25th March.