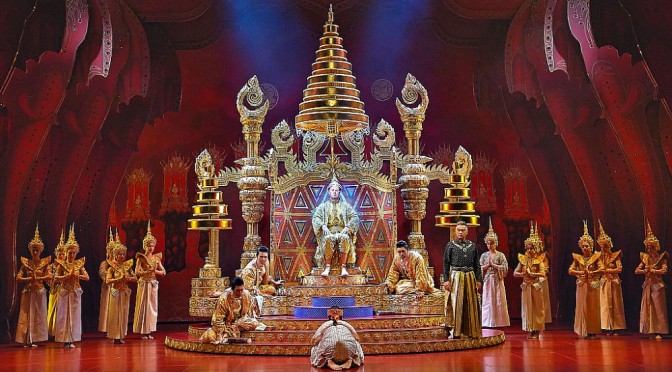 Opera Australia have brought to Sydney a most splendid production of Rogers and Hammerstein’s THE KING AND I with a gigantic cast and glorious , lavishly opulent ,dazzling sets and costumes .Directed by Christopher Renshaw ,it is an aural , olfactory and visual feast and treat : Brian Thomson’s set designs are outstanding as are Roger Kirk’s costumes. The curtains, screens etc allow for almost cinematic fluid scene changes , torches burn brightly and incense wafts through the auditorium.

The production broke all box office records before it even opened – over $8.4 million ! .And it is estimated that over a quarter of a million people will have seen the show by the time it finishes its national tour.

THE KING AND I is based upon Margaret Landon’s novel, ‘Anna and the King ‘; which draws upon the real life Anna Leonowens’ memoirs.Premiering in 1951,‘The King and I ‘ presents us with an enchanting , delightful (if already outdated then , let alone now) imagined Siam, a nation that had avoided direct colonial rule and was governed by an absolute monarchy until 1932. Siam officially became Thailand in 1948.

With the surrender of Japan also still fresh in people’s minds as well at the time of writing the musical , the submission of an autocratic Asian emperor to the principles of Western democracy adds yet another layer to this story of a deified ruler intrigued by the modern world and the feisty English governess he employs to teach his many children about it .

Lisa McCune is absolutely tremendous as Anna , loving yet firmly determined to stand up for herself and what she thinks is right. She gives an excellent if somewhat delicate vocally performance of her set pieces, – ‘Hello Young Lovers ‘ ‘ Getting to Know You ‘ etc. and a spunky , rather funny version of ‘Shall I Tell You What I think of You ?’. Her ravishing gowns are more than exquisite and she deserves great kudos for her deft management of the huge crinolines. At one point she is a vision in pink and white.

Charismatic Teddy Tahu Rhodes is in superb form and glorious voice as the King, bald and extremely imposing , glittering in red and gold , encrusted with jewels . He follows in the now legendary steps of Yul Bryner who will be forever associated with the role. His natural dignity is combined with Mongkut’s volcanic explosiveness ,incorporating Bryner’s macho, imposing stance. His singspiel soliloquy ( aria? ) ‘A Puzzlement’ almost becomes a tumultuous inner battle of the soul. Some of the lighter moments are , however ,perhaps a touch awkward.

One of the main highlights is the staging of choreographer Jerome Robbins’s show-within-a-show, ‘The Small House of Uncle Thomas ‘, which the huge ensemble (under the eagle eye of Susan Kikuchi and glorious in Roger Kirk’s costumes) executes tremendously , showing the blend of Eastern and Western cultures in the angular arms, Buddhist ‘angels and Kabuki like representations of water etc .and the striking almost a-tonal music .

The singing was superb. Another is the ‘March of Siamese Children ‘the twelve children of assorted ages (representative of the 67 the actually king had) being enchantingly cute.

Some of Hammerstein’s script now sounds ultra awkward at times. The writing for the thwarted lovers ,new Burmese concubine Tuptim (Jenny Liu) , given as an unwilling present to the King and her secret lover Lun Tha (Adrian Li Donni) presents them as sweetly childlike. Their voices though and musically they are lushly operatic. There is marvelous work in the other supporting roles, led by Shu-Cheen Yu as Lady Thiang , the head wife desperately in love with the King , (her‘Something Wonderful’ is magnificent)and Marty Rhone as the rather cold ,severe Kralahome (Prime Minister) .(It’s a shame the role does not give the former 70s pop star much of a chance to sing.)John Adam gives the British diplomat Sir Edward Ramsey immediately charming and sympathetic life with just the tiniest touch of G&S perhaps.

Under the enthusiastic baton of Peter Casey the marvelous orchestra does justice to the lush romantic Orientalism of the score, the sweeping joy of the music.

Much ink has been spilled over the political incorrectness of the production , whether it should be on at all and the casting .But this is such fabulous production who cares !

Yes , it was opening night but it is most unusual for virtually the entire House to rise for a cheering screaming standing ovation at the end. Fabulous.

THE KING AND I  runs at the Joan Sutherland Auditorium Sydney Opera House until November 1, 2014.