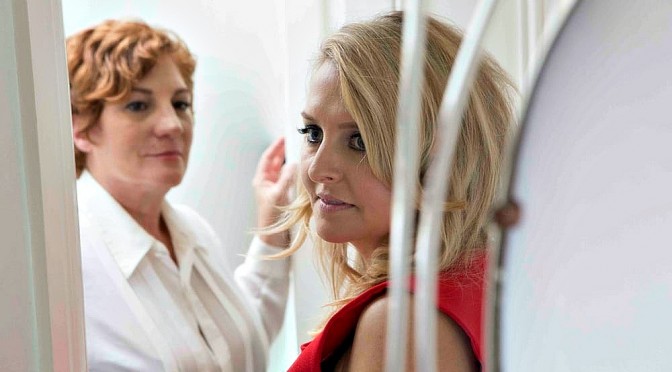 “They are going to murder me.”

Marcus’ play tells the story of television actress June Buckridge, nick-named “George” because of her character name, “Sister George” in the series. She is about to be written out of the popular TV show “Applehurst”- mainly because of her scandalous off-camera antics. As the gentle, kind-hearted nurse on the popular British soap opera, everyone loves her. But the actress who plays her is an abusive, cigar-chomping, gin-swilling lesbian. When gossip begins to swirl about the personal habits of the actress, BBC executives decide to kill off the beloved character, thereby unleashing George’s true brutality.

We learn that the relationship between George and her flatmate’ “Childie,”swings from being loving and affectionate one minute, to screaming rows the next. Always coming off worst, poor Childie has to show contrition by subjecting herself to the most humiliating actions before she is forgiven by her merciless and sadistic partner.

Accused of molesting two catholic nuns in a taxi, George incurs the ire of the Head of Religious Broadcasting, who puts in a complaint to the BBC board on behalf of the Mother Superior of the convent where the two novitiate nuns reside.

When George is reprimanded by BBC TV Executive, “Mercy Croft’’, she gives a very ‘high-camp’ description of the episode, making a joke of it. But Mercy does not see the funny side of it, and plots to have George sacked from the show, eventually succeeding in getting rid of her. While visiting George to keep her informed regarding the change in the show, Mercy begins to take more than a passing interest in Childie. She sets about to cause a split between the two.

When the final decision is made to take George out of the show by being struck and killed by a ten-ton truck, she is offered the job of doing the ‘voice-over’ of a cow for a children’s animated series as compensation. She tries everything she can to prevent this happening, but eventually, when everything fails, she realises that her TV career has come to an ignominious end. When the final scene shows George, alone and desolate, practicing rather pitiful cow sounds, it is obvious that she has finally resigned herself to her fate.

The all-female cast moves the action along at a riveting pace, keeping the first-night audience eager to see how the drama will eventually unfold.

“Madame Xenia” is the flamboyant downstairs neighbour and is played by Sarah Jane Kelly. Her characterisation if perfect and her accent is consistent throughout. As she flits in and out of the play, she adds a delightful comic relief to the otherwise rather dark scenes.

Helen Stuart’s Mercy Croft displayed the character’s fake charm, and plays the role with all the conniving and cunning required.

Deborah Jones (George) and Natasha McNamara (Childie) both bring a lifetime of experience to their performances, and play off each other convincingly in their scenes together. Their actions and reactions complement each other perfectly, each giving the other plenty of room to explore and depict their particular character traits.

Even with the advantage of working with such experienced actors, Director Peter Mountford still needed to possess a high degree of sensitivity towards the difficult subject matter. Evidence of his success came from the standing ovation received at the conclusion of the play.

Judith Hoddinott’s set successfully depicted a typical London flat circa 1964 and made full use of the space available in the relatively small theatre.

In an industry where ‘word of mouth’ is much more valued than any amount of paid advertising, word will quickly spread that this is a ‘must see’ event, and those intending to go should get in early before the ‘’HOUSE FULL’’ signs start going up.

THE KILLING OF SISTER GEORGE, presented as part of the Sydney Gay and Lesbian MARDI GRAS FESTIVAL 2016, is playing the King Street Theatre. 644 King Street, corner of Bray Street, until 4th March. Performances are  Wednesdays to Saturdays at 7.30pm and Sundays 5 pm. until March 4.