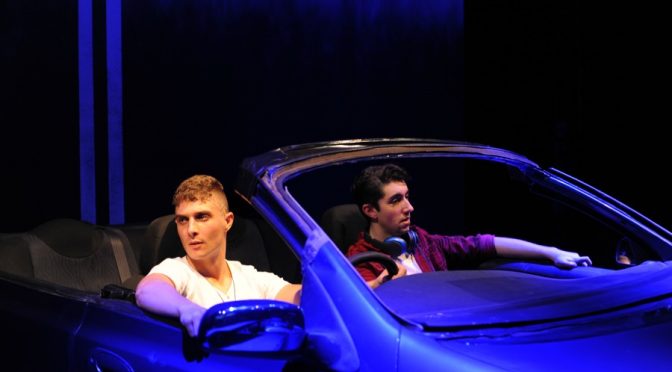 Perhaps those of us who crave intimacy in our theatre going prefer a small story… a family, a young man adrift. Those of us who choose challenge and ideas beyond our smallness might want the immersion of symbols and history… place and a codified seeking of understandings.

THE INCREDIBLE HERE AND NOW has just completed a successful season for the National Theatre of Parramatta at Riverside Theatre. It was the perfect blend of human story and world view. Warm and funny and human and thought-provoking.

We meet Michael before the show starts as he sits and writes on his laptop. This year 10 student is the chronicler of his family. He is our guide and speaks directly to the audience to explain, point stuff out and give his adolescent view on close to home events. He scribbles his life on a small flip page notepad.

He’s in the shadow of his older brother Dominic who is adored and indulged by his mother. His black sheep Auntie Leena also adores and indulges ‘The Dom’ but her compassion for Michael is equally limitless. It’s a bit hard to see where Michael fits into the existence around him until we meet his grandfather. Pops isn’t doing too well at the end of a life lived in one place but in him we see the man that the boy might become after the catastrophic central event of the text. There is big picture storyteller and keeper of worlds to be nurtured in Michael.

National Theatre of Parramatta commissioned THE INCREDIBLE HERE AND NOW from local Parramatta author Felicity Castagna based on her multi award winning novel. It takes the truisms of Western Sydney life and confronts realities head on. There’s boys and cars, there are Eels scarves and belly button rings, there’s insults like poof and there are images of places within a walk of the theatre. There is history, culture and no shortage of misunderstandings and negative inferences from elsewhere.

The production is wonderfully conceived. A boy’s doof doof car at one end and the demolition signs and scaffolding of transformation at the other. Familial story versus towering change. Using 2 large screens each side of the traverse seating, an audience is easily able to view stills and video which convey place and time while supporting the plot. At the head of the traverse, in front of the car, is a much larger screen. This carries the watermark of road and white line into infinity. It is this screen that provides the symbolic, emotive power.

There are symbols everywhere in this production. The impelling event of the show, for example, is created with powerful physical images, sound design (Sean Van Doornum) and lighting (Martin Kinnane). There is stillness and clever staging all through this show yet directors Jeneffa Soldatic and Wayne Harrison have endowed their cast with a lightness. Each has a personal presence in the story that belies the depth of audience empathy with what is happening to these characters. Sadness and loss without wallow and resilience implied throughout. Even in despair.

The grief strikes most evidently at Mum (Caroline Brazier) in a poignant and moving portrayal. Dom (Alex Cubis) is big and broad and relatable … we have all met this guy… but softer side is believable too. As Michael, Bardiya McKinnon strikes the perfect note of youthful surliness, disenfranchisement even, allied with intelligent analysis disguised as observation.

Shadi (Ryan Peters) is goofy and charming, especially in the pool scene where the torture of gender relations in hung out like a wet towel drying. Olivia Simone, Libby Asciak and Sal Sharah playing multiple roles round out a terrific cast to tell the story of family, the story of a suburb and, sadly, the story of how change is inevitable.

THE INCREDIBLE HERE AND NOW
is a high quality, exciting and resonant production which is ultimately accepting of the progress around it. The family and the community around them will thrive but, like Michael and Poppy, the audience is encouraged to accept that inevitability but to hold the past close to their heart.