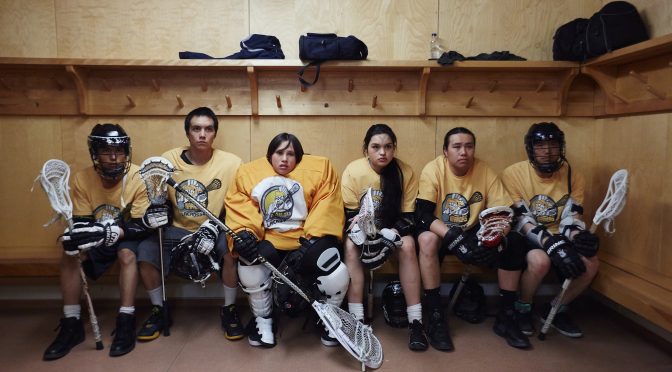 The award-winning drama explores how a group of Inuit high school students living in Kugluktuk, a small arctic town with the highest teen suicide rate in North America, transform their lives and community after their teacher starts a youth lacrosse team.

The film also delves into the effects of issues like intergenerational trauma on First Peoples communities, highlighting the adversities the real life Grizzlies and their community overcame to bring the teen suicide rate down to zero in Kugluktuk.

Nearly two decades after it began, the Grizzlies program is still going to this day.

More than 600 youth in over 25 communities across Nunavut and the Northwest Territories auditioned for roles in the film. Amongst this group were cast members Paul Nutarariaq and Anna Lambe who received Canadian Screen Award nominations for their roles in 2019.

THE GRIZZLIES is Miranda de Pencier’s (Anne with an E) feature length directorial debut and was made in creative collaboration with Inuit producers Alethea Arnaquq-Baril and Stacey Aglok MacDonald.

A paid mentorship program invited Inuit actors, crew, musicians and other creative collaborators to participate, and in the end, more than 91 percent of the cast and more than 33 percent of the crew were Inuit or Indigenous.

Heritage Films’ has introduced films to audiences since 2004. The vision of their company is summed up in their passionate belief that movies change people and people change the world.

What: THE GRIZZLIES Australian Theatrical Release

Sydney Arts Guide has ten in season double passes to give away to see ‘The Grizzlies’.  editor.sydneyartsguide@gmail.com. with THE GRIZZLIES PROMOTION in the subject heading and your postal address in the body of your email.