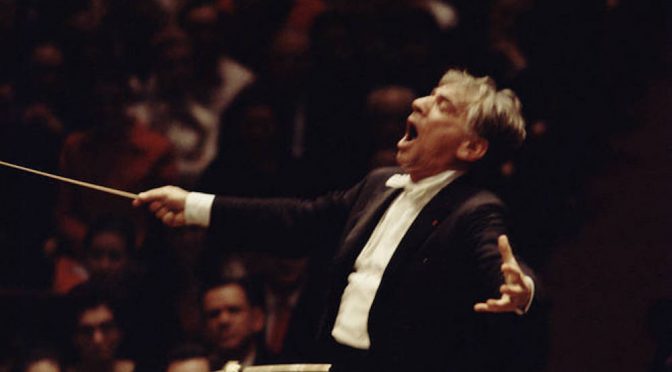 Sibelius once said nobody ever erected a monument to honour a critic.  Like all talented people, Leonard Bernstein had his fair share of critics.  What irked him most, however, was the amount of time critics wasted on writing about his flamboyant style rather than on his interpretative skills.  He once said that when conducting he felt he was not just interpreting the music he was actually composing it.  His style was not only different but, based on his contemporaries, almost verged on the salacious.  These days we are used to conductors using their whole bodies to convey a musical point, but in the 1940s and 50s it was a case of letting the hands do the work and keeping the body in check.  Conservatism was the expected norm and critics expected conductors to conform.

Which is not surprising, given Bernstein’s temperament throughout his life and career, that the reviews he received on making his sensational debut with the New York Philharmonic in November 1943 (it was also broadcast nationally) when deputising for an ailing Bruno Walter, were not exactly ecstatic.   ‘He conducted without a baton,’ Oliver Downes of the New York Times complained, ‘justifying this by the instinctively expressive use of his hands and a bodily plastic which is not always conservative’.    Arthur Berger of the New York Sun, not to be out-done, added:  ‘Some of the flares of temperament ….might fruitfully be modified and the stamping of the foot should be avoided’.

Harold C. Schonberg, who received the Pulitzer Prize for criticism in 1971, was an author of books on pianists, conductors and composers and, incidentally, also an expert on chess.  He was one of the most feared of music critics during his tenure at both the New York Sun and the New York Times between the years 1946 to 1980. He wrote:  ‘Thoughtful people are beginning to complain more and more of Bernstein’s antics on the podium.’

But the pinnacle of criticism must go to Virgil Thomson, himself a child prodigy, composer and organist and later a mentor to our own Graeme Koehne who studied with him as part of his extended musical studies.  Thomson was initially a music critic for Vanity Fair but following a brief stint in Paris between 1925 and 1932, returned to New York to take up the post of music critic for the Herald-Tribune.  The post lasted well into the middle 50s.  He wrote this of Bernstein:  ‘(He) has embraced a career of sheer vainglory……he shagged, shimmied and believe it or not, bumped…..(his conducting) contained corybantic choreography…… With every season his personal performance becomes more ostentatious, and his musical one less convincing.  There was a time when he used to forget occasionally and let the music speak.  But nowadays, he keeps it always, like the touring Italian bandmasters of forty years ago, a vehicle for the waving about of hair, for the twisting of shoulder and torso, and for the miming of facial expressions of uncontrolled emotional states.’

When Bernstein crossed the pond the British press started echoing the misgivings of their American cousins.  Was there a conspiracy being hatched, one wondered.   ‘He looked as if he was playing a part choreographed by Jerome Robbins,’ wrote the Daily Express.  ‘He swayed, stabbed, crouched and leaped in the air, both feet clear of the ground several times, like a pocket-sized Tarzan.’   And the London Times chimed in with: ‘Even in a stunt performance…… it is not good conducting technique to leap into the air.’

Later, two critics from the New York Herald-Tribune had to have their 10c worth.  ‘In rehearsal his conducting was precise and his gestures economical.  Once the audience came through the doors he turned into a monster,’ wrote Paul Henry Long while Alan Rich supplemented that with: ‘(I object) to his bobbing and weaving and leaping as if auditioning for the basket-ball team.’.

But Bernstein also had his admirers.   In the early 1970s, soon after his switch from recording for Columbia Masterworks to recording for Deutsche Gramophon, he embarked on a European tour with the Vienna Philharmonic.  Two conducting super-stars, Herbert von Karajan and Bernstein became the prized jewels in the crown of DG’s classical repertoire and, whether by coincidence or design, both found themselves performing at the same time in Vienna.  Karajan was then conducting the Berlin Philharmonic.

The Viennese music-critic, Karl Löbl, compared both conductors thus: ‘Karajan heats the music up, Bernstein sets it on fire.  Bernstein is always spontaneous, Karajan performs what he has rehearsed.  Karajan conducts Beethoven, Bernstein feels himself to be Beethoven.  Bernstein shows his feelings, Karajan never divulges them.  Both are musicians. How wonderful to have them both here at the same time.’

Even Harold C. Schonberg, perhaps by then having acclimatised himself to Bernstein’s antics and eccentricities, showed signs of mellowing.  After listening to a performance of Beethoven’s 9th, he wrote, ‘it had all of Bernstein’s expected attributes and mannerisms.  It was dramatic.  It was theatrical.  It was highly personal and involved.   Some might have called it vulgar.  Some with equal justice could have called it self-indulgent.   But one thing it did have……Life.   This performance simply pulsated with life.’