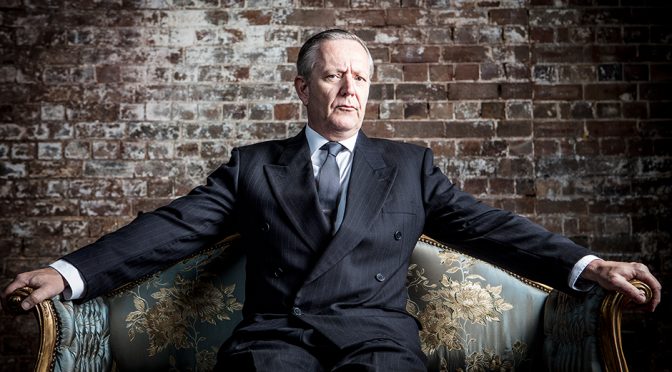 I must declare my bias in that I am a huge fan of Paul Keating. I used to watch question time in Parliament to witness Keating’s  wit and viciousness. In this regard I am similar to President Suharto who although he was a dictator would obtain tapes of Paul Keating performing during Question Time and as a result relations with Indonesia  became warmer.

There is also the axiom about politicians and babies and I have a photo of a beaming Paul Keating with my four year old daughter sitting happily on his lap. It is irresistable.

This work of theatre is a break out from the Wharf Revue of 2018 wherein Jonathon Biggins skit about Paul Keating drew a very strong response. Biggins decided to expand on his time with the former Prime Minister, stating that he was all iceberg and no tip thereby reversing one of Paul’s marvellous insults  when he referred to his ‘victim’ as all tip and no iceberg.

The play is set in what is purported to be Paul Keating’s study complete with wall panelling and the obligatory french clock collection including a beloved pocket watch which he alludes to as being nearly the most perfect thing in his life.

The audience was my baby boomer cohort who had lived through the turbulent times of Gough Whitlam, Bob Hawke and Paul Keating and indeed former Premier Bob Carr and his wife Helen were in the audience.

As with any great performance there are some unexpected poignant moments particularly when he runs a slide show which shows pictures of Keating’s late mother and grandmother. He pays tribute to the fact that their deep love for him gave him the confidence to tackle anything.  He also conveys the deep pain he felt when he ran to the local TAB to find his father dead on the footpath aged only sixty years old.

Without any University education  but with a fierce intelligence and bravura he managed a rock and roll band, the Ramrods, which he actually steered to England but couldn’t keep them together.

When Keating was elected to the Federal Parliament he was its youngest member. The play also talks about Paul Keating’s huge admiration for Jack Lang with whom he had one hour weekly sessions, not a minute more, nor a minute less.

The show treads delicately about his failed marriage to Anita and despite aiming a few barbs at Bob Hawke there is regret that he had to ‘knife’ Bob Hawke in such a brutal way.

Jonathon Biggins adopts Paul Keating’s posture and voice mannerisms as he prowls around the room excoriating hilariously allies and opponents alike. He is proud of his Sorry speech, deregulation of the economy, the removal of tariffs, and heaps gorgeous scorn on those who opposed him in these endeavours.

The vulgarity of his many attacks cannot be printed in this august journal but the broad minded audience roared with laughter. The combination of coarseness, wit, ego, mixed with a love of Mahler, fine clocks, and snappy Zegna suits as depicted by Jonathon Biggins drew an admirable complexity to perhaps our most charismatic Prime Minister.

Director Aarne Neeme has Jonathon Biggins prowling his study such that you cannot keep your eyes off him as we sit on the edge of your seat to drink in every deliciously wicked bon mots.

The set design by Mark Thompson  evokes a room that you could believe was lived in by Paul Keating.

The lighting designer Verity Hampson had her work cut out for her as she had to subtly light Biggins as he roamed the stage, did a song and dance with  Biggins switching to vaudeville and dimming the lights for his slide shows. Despite sitting quite far back in the Playhouse sound designer David Bergman amplified Biggins such that hardly a precious word was lost..

I cannot remember the last time I laughed so much and so heartily and yet learnt so much more about this man whom I admired so much. Paul Keating loved Keating The Musical. I do not know if he has seen this show but I am sure he would like it to.

Biggins has doled out a few performances only and I urge you to not miss this gem.

THE GOSPEL ACCORDING TO PAUL is playing at the Playhouse, Sydney Opera House until Saturday 18th May. Biggins will come back to Sydney for a return season at the Seymour Centre between the 15th and 27th July, 2019.

One thought on “THE GOSPEL ACCORDING TO PAUL @ THE PLAYHOUSE”