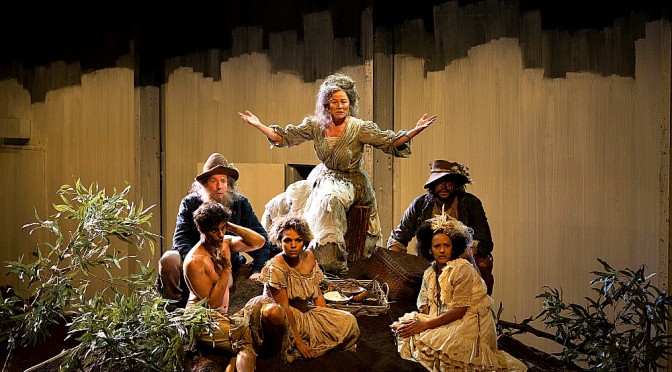 Different shows/films tap into/speak to different part/s of our  selves. It can be the romantic aspect, the rogue part, the adventurous part…each of us has so many aspects to who we are. The Sydney Theatre Company’s current production of leading Australian playwright Louis Nowra’s THE GOLDEN AGE taps into the philosopher inside of me…

As human beings, we each have numerous choices about the way that we live our lives, the world/s that we choose to inhabit. These choices range from the most simplistic, primitive approaches to the most complex and sophisticated.  Who can truly say which is the better way/approach/path to take?! In the end, doesn’t it come down to which path is true to the individual, and that the ‘individual’ should be able to live out the choices that he makes?!

Tragically, this isn’t the way that things play out in THE GOLDEN AGE. In Nowra’s play, two young men, Francis and Peter, leave their bourgeois Hobart lives and go trekking in the Tasmanian wilderness. In the wild they come across what can be best described as a lost tribe, a group of people, a clan, descendants of European convicts, who long ago escaped from the main group, and have also long ago been forgotten, and are now living a primitive, nomadic existence.

Francis and Peter befriend them and convince them to journey back to Hobart with them. What ends up happening is as sad as it is inevitable, the tribe has its identity and soul subsumed by mainstream society who deem them as inferior. One cannot help to see parallels with what happens to them with what happened to our indigenous population when the British landed in Australia.

Kip Williams, the Sydney Theatre Company’s brilliant Resident Director, helms the current production and has brought together a great team, and come up with a strong revival of Nowra’s play which premiered in Sydney, in a production directed by Neil Armfield.

His creative team- set and costume designer David Fleischer, composer and sound designer Max Lyndvart and dramaturg Paige Rattray vividly create the play’s world. Fleischer’s set design is dominated by a large heap of soil- alluvial silt and ochre- in the middle of the stage.

A very fine cast bring Nowra’s rich array of characters to life. Brandon McClelland and Remy Hii play the two young men, Francis and Peter who stumble upon the ‘lost’ tribe living in the wild. Robert Menzies and Ursula Yovich play Peter’s parents, William and Elizabeth Archer, living a very bourgeois life in Hobart, with  William being a leading psychiatrist.

Bookings- http://www.sydneytheatre.com.au. Tickets from $64 (fees apply). Suncorp Twenties- tickets for just $20 for every performance- are available every Tuesday at 9am via the Box Office on 92501777 for the following week’s performance. Performances are Mondays to Saturdays.