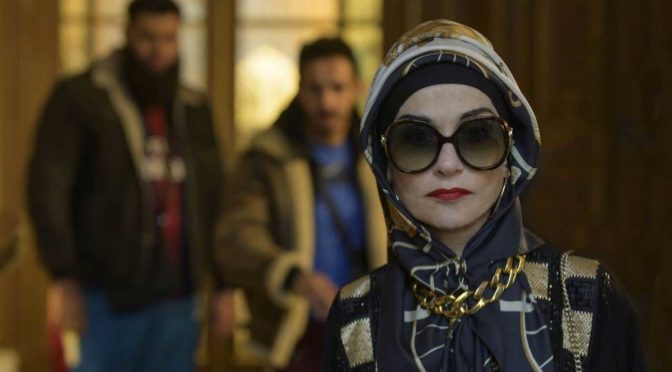 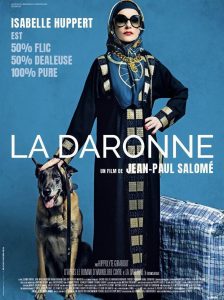 Full up to dolly’s wax with drollery, THE GODMOTHER (LA DARONNE) launched this year’s French Film Festival. Such is its general charm and universal themes, it has rightly scored a wider release.

Isabelle Huppert plays Patience, a police interpreter assigned to the narcotics bureau targeting illegal Arab drug distributors. She has placed her mother in an assisted care facility that is costing her a fortune. But her mother’s chief carer, an Arab woman, makes the expense worthwhile.

When the carer’s son is targeted by the narcs, she seeks Patience’s help, and so a career side step is put in motion, with the interpreter accidentally becoming a hash entrepreneur, known to police as Mama Weed.

Patience’s double life becomes a caper of disguise, deception and duplicity, made all the more precipitous due to her romantic entanglement with the chief police investigator.

Patience receives beneficent support from her landlord, Madame Fo, herself leading a clandestine life as a purveyor of the black market.

Directed by Jean-Paul Salmonè, THE GODMOTHER is written by Hannelore Cayre, the author of the original novel, La Daronne.

THE GODMOTHER is a film full of ticklish reverses with Huppert rampageously playing Patience, beating the system at its own game and coming out on top.

The support cast is excellent, with Liliane Rovere as Patience’s pixilated mother, Farida Ouchani as her devoted carer and Nadja Nguyen as the formidable Madame Fo a standout.

The blokes come out of it as oafish – cops and criminals alike – big swingers with more swagger than intelligence. Only the police chief, played by Hippolyte Girardot, seems to have as much substance between his ears as between his legs.

A crime caper with a social conscience, a comedy caper that has heart, THE GODMOTHER is full course meal disguised as dessert.