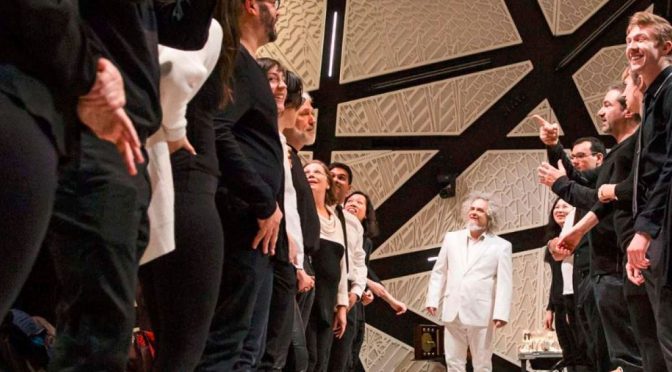 THE GAUNTLET has been described as an immersive choral experience in which the “lyrics” are formed from interviews with twenty of Sydney’s “interesting citizens” – social, political, cultural and environmental activists – about global, local and personal issues.
It is a tonal, musical, theatrical movement installation of Sydney stories performed by Sydneysiders however temporary that may be.

The piece was developed by Sxip Shirey (music) and Coco Karol (choreography). At the first performance, several of those who had been interviewed waited expectantly to discover how their words would appear. The long line of audience ready to ‘run the gauntlet up the stairs’ murmured in quizzical anticipation and watched as returning members walked back with soft smiles on their faces.
Both Sxip Shirey and Coco Karol perform as well as engage in their other artistic talents. Both are credentialed, highly experienced and regarded New York based artists.

Shirey was the leader of the lyrics – single words, tones and phrases taken from the interviews and passed down the lines and around the circles by fifty members of the Sydney Philharmonia Choirs. There appeared to be six ‘rounds’ with most staged on the internal staircase outside the Joan Sutherland Theatre. Despite the tendency for words passed along long chains to vary considerably by the end, the singers maintained the messages with individual tonal and gestural interpretation. A theme of water and sea flowed through messages about the environment, refugees.

Karol, plus a couple of other dancers interwove between singers, and guided the audience in transitions between places. They appeared pale nymphs, sea urchins, free flowing yet clinging nearby the lines and words of singers who were perched on pedestals to sing over the audiences’ heads. Like the audience they too were submerged.

Young children appeared to enjoy it and got messages about climate change. Audience members individually felt joy, hope, and acknowledgement that change comes from ‘in you and in me’. Whilst the Australian national anthem was drawn out until it became almost ‘mundane’ with the word “fair” pounding in the sea, the final part cascading into the theatre entrance foyer lifted the mood again.
Indicative that the sea is not under our control, nor is human kind interacting with it, the show lasted almost 85 minutes. Some people took short standing and sitting breaks within it, and some singers found the continual focus challenging with bodies passing by and through. Overall, the meditative swim in this submersive soundscape is well worth it.

The experience goes beyond that of attending a concert in that the body exploration woven into both interviews and performance somatises the messages and makes it a visceral experience. The stories of refugees and homeless people being sung in the magnificent Opera House is truly iconic Sydney.

As the choir leader, Shirey has a lot of material from which to draw the lyrics and thus each performance may be different. In this interactive performance, as the words and audiences change the choreography is influenced and outcomes differ.

There is one more day of ANTIDOTE, “a weekend of ideas, action and change” today Sunday 2nd September.  THE GAUNTLET was  a 75-minute ticketed event, which involves the audience walking through traditional non-performance spaces at the Sydney Opera House. 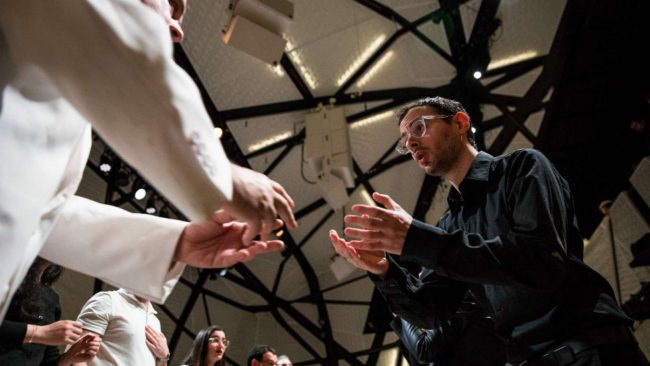