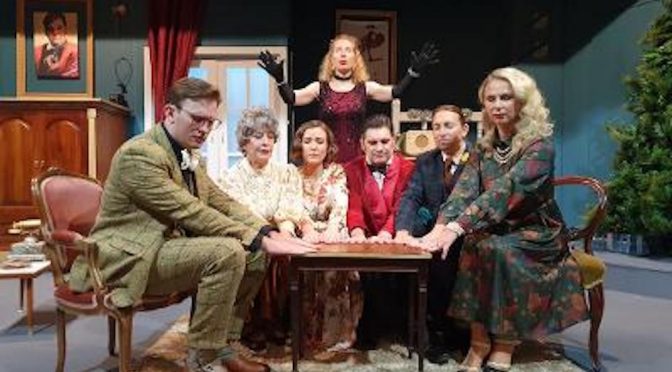 Like mystery? Like Hollywood goofballs? A satire on genre? A sendup of preening thespians? Big comedy, big acting, big laughs? Then head down south to the Arts Theatre Cronulla.

The play opens with the closing scene of a Sherlock Holmes murder mystery beautifully hammed out by a cast of actors portraying a cast of actors and thus heralding in the scale of the comedy. It’s physical, it’s big and entirely believable.  As the players playing players take their bows a gunman from the audience shoots the lead actor, William Gillette (Gary Clark). This instigates an invitation to his fellow actors and the theatre critic, Daria Chase, to his Connecticut Castle for a Christmas get together and his amateur sleuthing into the attempt on his life.

Set in 1936 the play sends up not only Sherlock Holmes but whodunits, séances, a delusional actor who dons his character’s profession in real life, stage actors, theatre critics and fandom. Set in America, a challenge is posed to maintain the US accent which is mostly met. Another challenge is in the delivery of William Gillette’s character. Here we have an Australian actor portraying an American actor with a fixation on a famous English character. Having referenced Sherlock Holmes in the title, the advertising and in the stage life of William Gillette, an expectation to see him parodied on stage isn’t quite met. Does it detract from the flow of the show or the laughs – in no way.

The show is a rolling farce delivered by a very capable ensemble cast. Where the script has been extended with mime and stage business it becomes hilarious – a real treat. Nudge-nudge, wink-wink takes on a whole other meaning in the eyes and shoulders of William (Gary Clark) and Felix (Michael Barlow). Their physical comedy is perfectly timed.

Among a talented and cohesive cast it’s hard to single out a particular performance, they all do so well. Narelle Jaeger as Martha Gillette has just the right amount of motherly immersion and sangfroid as a foil to her son’s desperation; there’s the plasticity of Arianne Hough’s facial features and her comic timing; the way Margareta Moir, as the despised critic Daria Chase, commands the stage with her presence and then diminishes to a human prop with the problem of her absent presence (no spoilers); Jayne O’Connell’s delivery of brassy American stage starlet Madge Geisel could set the era with her performance alone; and then there’s the séance – you’ll die laughing. The cast is rounded out with strong performances from Rachele Edson and Luke Austin.

Aiding the comedy is the clever set of James Bruce, Tom Richards and Neil Moulang. They have gone all out including a revolving room, a staircase and a scenic balcony extending upstage through a central door. It’s not just pretty but functional as the revolve’s capabilities are milked for comic effect.

Witty one-liners, clever banter, acerbic wit peppered through a funny, well-paced plot that’s extended with delightful stage business, THE GAME’S AFOOT  runs with plenty of laughs.Tickets can be purchased online at www.artstheatrecronulla.com.au or over the phone after 10am 95232779.

Featured image : The seance scene in ‘The Game’s Afoot (Holmes For The Holidays).