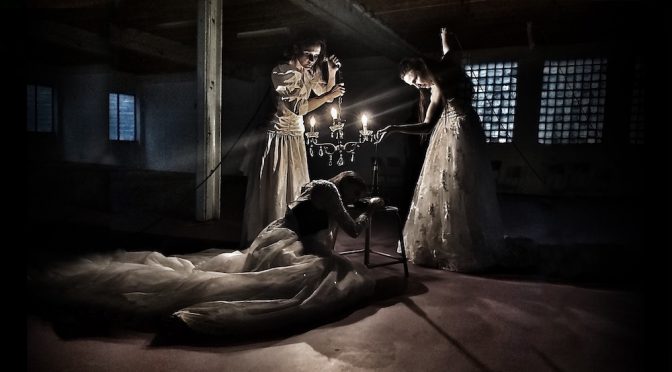 THE FOUL OF THE AIR eschews verbal language. Apart from a opening gambit, what little there is is skewed in guttural, incomprehensible whispers, a theatrical technique that is compelling in itself but leaves one wondering why spoken and written language, in its myriad sub-forms, which might help focus the work as a whole, is so erased or neglected. Michelle St Anne, the Artistic Director, works in a long tradition of performance art, much of which maintains an opposition to verbal and non verbal expression. Much of that traditional dichotomy was born out of decades of propaganda of war and oppression in Europe – however contemporary multiform expression plays with le plaisir du texte (Barthes) and perhaps it is time to revisit this opposition.

Post WW1 poetry of TS Eliot (Four Quartets, We are the Hollow Men) would have been leveraged well into the work. To hear voices, to read poems, to list names – these all honour requiem style the actualities of war and its aftermath, and prevent suffering becoming generalised. As Roland Barthes also said, without words or at least captions, pictures can remain unnecessarily ambiguous, and it is possible to conclude that, despite the joys of ambivalence in performance, THE FOUL OF THE AIR might finally remain unnecessarily ambiguous even incomplete.

Europe offers a vast number of extant ruins, museums, past concentration camps or renovated buildings where the memory of nearby past conflict can still be felt to permeate – in walls, soil, dust, placates and memorabilia. Australia is lucky to have escaped battles, except the frontier war, on its own soil. Wars are the closest we come to experience to violence seeping in through buildings to our being. Once again, knowledge of past battles comes to generations of Australians through video and text – another reason to develop the multiform style of this show.

All these images, and materials, are outstanding in their conception and execution. The stage work, and direction, is precise and arresting with many distinct, stylistic moments.

However, the cues and indicators of war and its effects are sketched rather than extended. There remains a certain randomness that prevents the audience organising all visual and verbal elements in an interrelated set or code of signification or narration.

The costumes by Farisa Adi are splendid in style, but why are they white? Why are three key dancers in nightwear, and also in bright costumes? Why is the entrance of one euphonic figure from the outside world also basked in white floods? Why five instruments, and why all the same type? What kind of violence? Where? How?

FOUL OF THE AIR is an established phrase. The title, in itself, is portentous, suggesting stagnation, grossly offensive, noisome, loathsome, disgusting.

Is there a potential theme of violence against women – not only in war but generally? Do the brush-stroked permeation of ideas justify such epic tropes?

If the work aims to be open-ended, and invite audience responses, then this is certainly achieved. However the postcard program expresses the intention to spotlight “the unchecked forms of violence that seeps out into the world around us, hidden in plain sight.” Is it certainly possible that different responses apart from war and violence are possible? Is this a dreamt nightmare? In that case there is no need to seek clarity or coherence in the signifying field that is the stage, and a postmodern process of subjective interpretation is possible in individual audience members as they relate aspects of their own life to the Rorschach theatre spectacle.

The various characters and persona seen and glimpsed could be ghostlike apparitions in an unspecified purgatory. The wraithlike visitant bathed in light descending internal stairs comes from some other place than war; there is the chimera of three dancers trapped in a purgatorial sequence (steps forward, then back) to tempo of crisply recorded dripping water; a haunted female bodach struggles trapped on a rusty iron bed until tipped onto the floor; apparitions glimpsed in dimmed visual vignettes low to the ground; the face painted musicians are vampires of the soul playing in shadowy half world; iterations of written text show clear meaning is exhausted; repeated dissonance of queued double bass instruments accompany this subhuman gross world.

To say the work is polyvalent is not really a criticism. The work and its elements remain satisfying, with high professional values. Musicians and performers are all accomplished.

The show is a pleasure to watch, and interpret and discuss in various ways.

Lighting (Dan Mercer) is accomplished, and uses and exploits (from within and without) spaces, columns, stairs and windows of the old factory space at Summer Hill.

The steady if not slow tempo, and regularised daunting vision, becomes attenuating, and repetitive. Meaning is deferred, and towards its end the show’s iconic appearance can become abstract and aesthetic. The musical work (St Anne speaks of music as the skeleton of her work) with dance and SFX becomes abstract, meditative even calming, a possibility that might not have been intended.

The limited program notes available speak of the show as genre bending. Many of its devices (use of an industrial space, random association of musical expression and movement, dislocated language) have been part of a proud performance art tradition, and it is very pleasing to see Living Room Theatre continuing such work in Sydney today.

Artistic Director Michelle St Anne has been influenced by European artists, and trained there: her commitment to works, her cast and to the production process deserves to be commended. I remember the staging of her 2012 work, I Love Todd Sampson, on both floors of the un-renovated wharves next to the Sydney Theatre Company. Through determined negotiation with tertiary and industry groups a transforming set of up to a dozen stages had been mounted. I have not seen an installation set of such scale and imagination, and believe it should be remembered in Sydney theatre history.

I saw the performance of the Living Room Theatre’s THE FOUL OF THE AIR at the Landlord, Summer Hill on Saturday 3rd April, 2021.