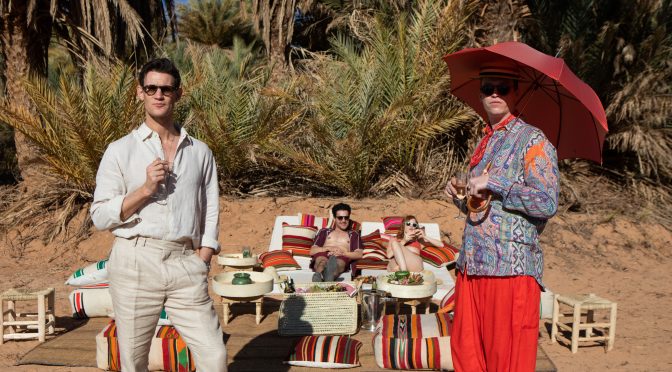 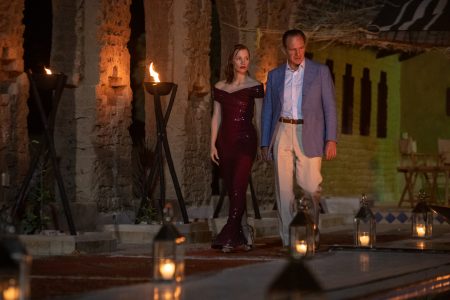 “I can suck a golf ball through a hose” says Abbey Lee, playing one of the hedonist guests at a lavish party pivotal to the appalling yet enthralling narrative of THE FORGIVEN.

Nothing obliges us to think any of these people admirable human specimens. Nor do we think them detestable. It is enough that they are interesting, disgustingly, decoratively, despotically fascinating.

Let’s start with the couple, David and Jo. David is a dermatologist, a functioning alcoholic freckle physician who fatally hits a fossil seller on his way to acquaintance Richard’s party somewhere in the desert outside of Tangiers. He had been arguing with his wife, Jo, just before the collision with the kid.

David bundles up the body but buries the boy’s identity papers. Arriving at the party unfashionably late with corpse in tow, David is definitely in need of a drink.

Their hosts, Richard and Dally, report the incident to the authorities who attend as a formality. Then dad comes to retrieve the body and requests David accompany him.

David and Jo are somewhat kin to George and Martha from Who’s Afraid of Virginia Wolf, he, an adroit wielder of politically incorrect snippet and verbal sadism, she the accepting recipient masochist, sharpening their claws on each other humiliating each other to mutual satisfaction in wincingly wicked word play. 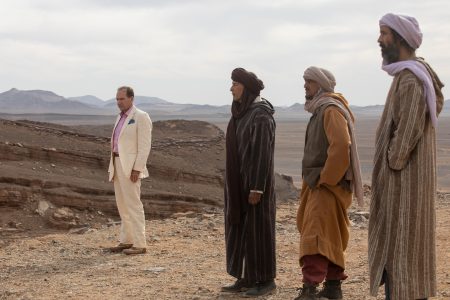 Richard and his lover throw flamboyant soirees that are tone deaf to taste. What do they care about threading a camel through the eye of a needle. And the same can be said of their guests.

Poverty and privilege collide, THE FORGIVEN is a masterpiece of well bred dread and well built guilt, an exploration of the poles between technical and moral innocence, and straight out insolence, and the luxe life full of wastrels.

Ralph Fiennes is in fine and devastating form as David, and Jessica Chastain marvellous as Jo.

As is Matt Smith as Richard, Caleb Landry Jones as his dalliance Dally Margolis, and Ismael Kanater as the grieving father, Abdellah, with Christopher Abbott as Tom, a somewhat Gatsbyish character.

Written and directed by acclaimed filmmaker John Michael McDonagh whose CALVARY and THE GUARD were also masterpieces of, if not redemption then readjustment and reappraisal.

See THE FORGIVEN or you’ll not forgive yourself.