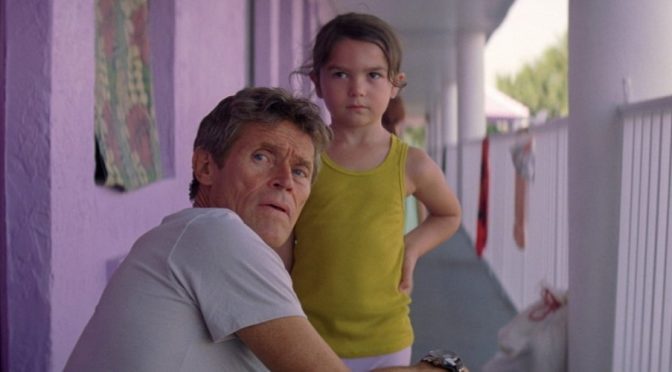 Blistering, bold, no holds barred, bah humbug festive season buster starring Willem Dafoe as the super of a block of Orlando apartments, THE FLORIDA PROJECT is the story of precocious six year-old Moonee, a stunning juvenile performance by Brooklyn Prince, and her ragtag group of friends whose summer break is filled with childhood pranks, possibility for misadventure and a sense of opportunity.

Living at a motel in the shadow of Disney World, Moonee is seemingly oblivious to the struggles of adults around her, including mother Halley, brilliantly played with brittle bravura by Bria Vinaite, and motel manager/father-figure Bobby, the type cast defying, Willem Dafoe.

US Highway 192, one of the main arteries leading to the throbbing heart of the Florida economy that is Walt Disney World. The Interstate is an artery hardened by economic downturn, the plaque of corroded civility creating less-than-magical living conditions right on the outskirts of Disney’s doorstep.

Motels line the road on both sides of the strip, many of them exploiting the Disney mystique, infused with such motifs as pirates and castles. A decade ago they were filled with tourists. Now, many of the motels do not contain tourists, but families.  In this pastel coloured world, designed to look like Fantasyland but housing the habitues of a harsh Realityland, a habitat of hustlers, grifters, drifters, those who fall through the cracks, we find the best and worst of humanity..

More Dickens than Disney, the characters here are vivid in their verisimilitude, astonishing in their ordinariness, endearing in their endurance of the struggle for life.

In A Christmas Carol, Dickens talks of people as fellow passengers to the grave, the great leveller and common thread that all of us share. THE FLORIDA PROJECT invites us to share vicariously in the journey of one sassy, in need of a slap little girl, a kid who could really benefit from some seriously responsible parenting, whose mother is no more than a child herself. Halley is more like senior sibling to Moonee than mother, bestowing delinquency rather than discipline.
Yet what could have been a bleak house tale of despair rises as a touching, strangely enchanting story.

Directed by Sean Baker and co written by Baker and Chris Bergoch, THE FLORIDA PROJECT sees an unleashing of the pair’s enthusiasm for the human, the humane and the humorous that enhances all.

Its honesty in writing and playing, its brilliance in cinematography and editing, makes THE FLORIDA PROJECT a Frontierland that augers well for a better Tomorrowland.  In a market where the barely competent bring home the box office bacon, this strikingly gifted film forbids to indulge in the kind of Kitsch that may guarantee it a hit.