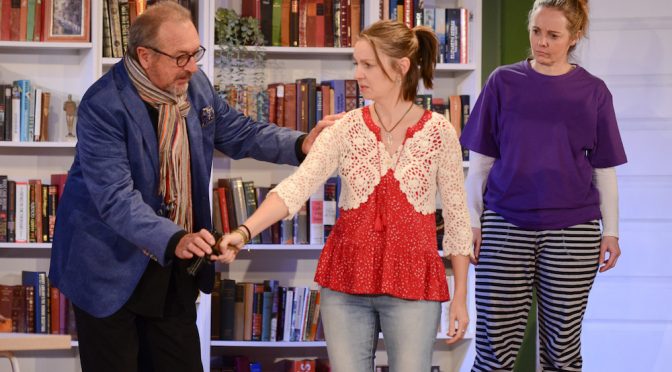 Prominent Australian playwright Joanna Murray-Smith is best known for her intense relationship and family dramas. THE FEMALE OF THE SPECIES, which premiered in 2006 at the Melbourne Theatre Company, is high comedy. There is nothing deep and meaningful to be found, just a whole lot of fun.

Murray-Smith’s inspiration for the play was found in an incident back in 2000 when legendary feminist Germaine Greer was present when her house was invaded by a disturbed student who detained her at gun point.

Her play starts with the same situation. Margo, a leading feminist writer, is at her desk on the phone to her publisher who is nagging her about the current book she is working on, which is already past deadline, when one of her young students, Molly, rushes in from the balcony and aims a pistol at her.Things get outlandish and extreme from the get go. The tome that Margo has made her name with is called ‘The Cerebral Vagina’ in which she advocates that women shouldn’t become mothers and instead should follow their creative/artistic instincts.

Molly, who chains Margo to her desk, tells her about how miserable her life has been because of her. Her mother gave her up for adoption following her advice. She ended up committing suicide. Molly recants how she got herself sterilised so that she couldn’t have children. Then she took her course at University and wrote an essay that she was extremely proud of only for Margo to say that it was a woeful effort and that she had no talent. Everything had come together to this point where she had come to her home to kill her. There was no other way!

The play’s five other characters walk in, unknowingly, on this siege. Tess comes into her mum’s place just wanting to go to her old  bedroom and have a sleep because she has been run ragged by her children. Continuing the play’s absurdist tone, it only occurs to Tess later that she has left her children without any adult supervision.

Next to come upon the siege is her buffoonish husband Bryan, followed by an impassioned taxi driver Frank, and finally Margo’s genteel publisher Theo. All the while Molly is still carrying her pistol.

There’s an old saying that goes, ‘everything in moderation’. There’s nothing moderate in Murray-Smith’s play which has been written in a fanciful, anarchic style.

Jennifer Willison’s production is faithful to this free flowing approach.

Willison’s set design works well with the open french doors to a balcony upstage to the right, the main stage area is Margo’s living room with writing desk, large bookshelf and sofa et al, and then to the left is the entrance to the off stage kitchen.

Catherine Potter is convincing in the central role, conveying Margo’s thick skinned nature. She feels that she is only being herself and expressing herself. Sure she is a bit of a provocateur but that is just get people thinking. Margo can’t understand what the fuss is all about.

Bettina Girdler plays Molly the disturbed student who points a hand gun at Margo. It is a very in tongue portrayal which suits the part well.

Tonia Davis plays Tess, Margo’s aggrieved daughter who has lived in the shadow of her famous mother and her academic pursuits. To add to her burden, her marriage is not a happy one and she is finding raising young children a hard task. Davis conveys Tess’s world weariness to a tee.

Anthony Slaven is great fun as Tess’s very goofy, loud, over the top husband Bryan. Slaven looks the part with his weird hairdo, his ‘loud’ glasses and his bright clothes.

Dan Ferris is also fun as garrulous taxi driver Frank who walks in off the street and chimes in with his own thoughts on Margo’s work.

The cast is completed with Michael Richmond’s brief role as Margo’s genteel, gay publisher who walks in on the melee, concerned that Margo’s hasn’t kept her appointment with him.

My favourite scene is when Tess is ready to protect her mother. She has crept in to the living room, unbeknownst to Molly, has picked up a statuette sitting on the mantlepiece and is about to clonk Molly when her mum starts on a bit of a diatribe denigrating her. Tess  puts down the statuette, introduces herself to Molly, and tells her that she can go ahead and shoot her. It’s a very funny, well played scene.

Rhonda Chapman’s costume design was apt for all the characters. Wayne Chee lit the stage well.

A Hunters Hill Theatre production,  THE FEMALE OF THE SPECIES is playing the theatre within Club Ryde, 728 Victoria Road Ryde until 3 July 2022.