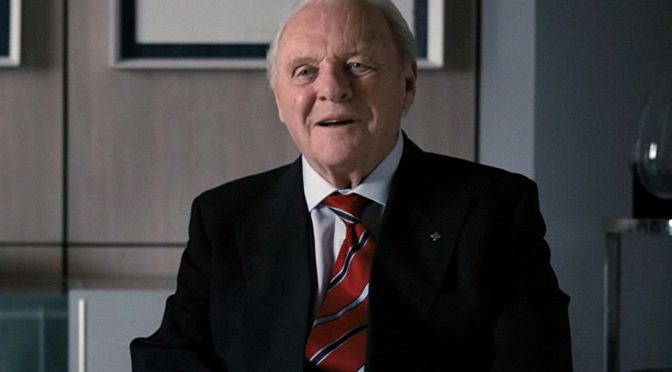 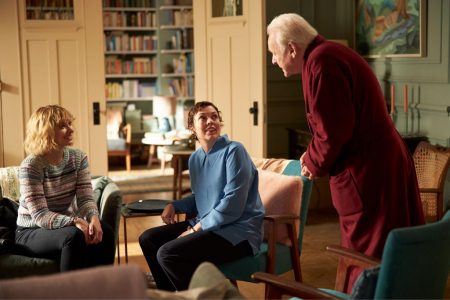 Haunting, harrowing, heart breaking, THE FATHER is a horror comedy.

The Demon is Dementia and there is no rite of exorcism to release the diseased from the hell of hallucination.

Anthony Hopkins plays Anthony. He lives alone in his London apartment and refuses all of the nurses that his daughter, Anne, tries to impose upon him. Yet such a necessity is becoming more and more pressing for her, as she can’t see him every day anymore: she has taken the decision to move to Paris to live with a man she has just met…

But if such is the case, then who is this stranger who suddenly bursts into Anthony’s living room, claiming to be married to Anne for over ten years? And why is he claiming with such conviction that they are at the supposed married couple’s home, and not his?

Is Anthony losing his mind? Yet he recognizes the place: it is indeed his apartment, and only just the night before was Anne reminding him of her divorce… And didn’t she decide to go and live in Paris? A city made unintelligible by virtue of a foreign tongue.

To his mind, the world has ceased to be logical. Is there a plot to unmoor his mind, jettisoning it from the jetty of reason? Is their objective in fact to rob him of his apartment? Do they want to get rid of him? And where is Lucy, his other daughter?

Loose in a labyrinth, a quagmire of unanswerable questions, Anthony desperately attempts to understand what is going on around him as reality crumbles little by little before his eyes.

THE FATHER is also the story of Anne, his daughter, who faces an equally painful dilemma: what must she do with her delusional dad? Does she have the right to live her own life? What happens when one must become parent of one’s own parents?

THE FATHER delivers us the diverse dimensions of dementia, the myriad memory rooms, the hidey-holes, the secrets and suspicions, the abdication of reason and the sense of abandonment.

In a career that has seen him attain summit after summit in a range of mountainous roles, Anthony Hopkins achieves zenith with THE FATHER, turning expected excellence in craft to absolute awe as soon as he is on screen.

A still, brimming pool running disturbingly deep, honing a Jekyl jocularity with the strop of a Hyde, a performance that is true and watchful and ruthless as the disease deranging his reality. He does not counterfeit confusion, he embodies it, with distinction and with dignity.

Olivia Colman as the distraught and distressed daughter, Anne, is a cauldron of confusion also, boiling in grief and guilt, and matches Hopkins in grades and shades, nimble in nuance, navigating the dire straits of joy and sorrow.

A superb supporting cast a mosaic of amazement into this poignant puzzle picture. Olivia Williams, who may be the real Anne, Rufus Sewell and Mark Gattis play people called Paul, and Imogen Poots is delighful as the charmed and chagrined in home help.

Hopkins, Colman and Hampton have won Oscars before and each of them are front runners for THE FATHER, but awards aside, this film is a must see for its power and engagement and its humanity.