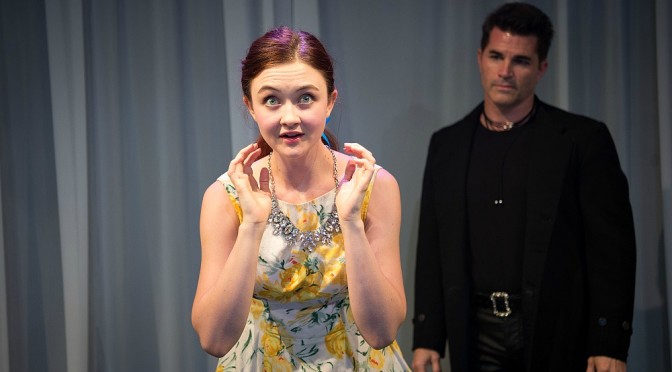 The original off-Broadway production of THE FANTASTICKS premiered in 1960, and ran a total of 42 years and 17,162 performances, making it the world’s longest-running musical theatre production, and has music by Harvey Schmidt with book and lyrics by Tom Jones.

Wooden Horse Productions Theatre  Company has brought this mercurial musical to the Hayes Theatre in a production directed by Helen Dallimore, with co-musical direction by Hayden Barltrop and Glenn Moorhouse.

The narrative is very loosely based on the plot of the 1894 three act comedy play, The Romancers (Les Romanesques) by Edmond Rostand, and tells an allegorical story, concerning two neighbouring fathers, who by pretending to feud, succeed in tricking their children, Luisa and Matt, into falling in love.

This is, indeed, a durable show, with delicious dialogue/lyrics, combined with a bright and innovative score that includes some familiar songs Try to Remember and Soon It’s Gonna Rain.

Martin Crewes returns to the Hayes for the first time since his Helpmann Award nominated performance in Sweet Charity, and is joined by Laurence Coy (High Society, The Drowsy Chaperone), Garry Scale (Hairspray, The Boy From Oz) and two recent graduates Bobbie-Jean Henning (WAAPA) and Jonathan Hickey (Queensland Conservatorium Of Music). Glenn Moorehouse whilst playing the guitar, had a small part as the Mute, .

All the cast deliver superb singing acting and dancing performances. Martin Crewes is very charismatic as El Gallo, and every actor easily becomes their indulgent and eccentric character.

During its very short season, you must see this glorious and exciting revival of the original 1960 version of this groundbreaking musical, with an exciting new interpretation that has two actors perform double roles, plus has just two musicians on guitars and electronic keyboard.

The production features a clever, minimalist set. Everything is seen by looking inside a gigantic grey picture frame that has been erected at the front of the stage. Throughout the performance, movable see-thru white curtains quickly changed the size of the performance space, and a double lounge was wheeled on and off as required.

This version still has the original comedy song Rape Ballet that when written in 1960 was intended to be farcical and funny, and in 2016 suffers from each repeated use of the word “rape” in the scene preceding the song, It depends on what you Pay.

Jones and Schmidt wrote an optional replacement piece in 1990 called Abductions, which uses the music of the Rape Ballet, plus the book is usually edited to replace the word “rape” with alternatives such as “abduction” and the similar-sounding “raid”. RAPE is not and has never ever been a funny word! It is a shame that this current production has retained the original song, when alternatives were available.

Recommended nevertheless, Wooden Theatre Company’s production of THE FANTASTICKS is playing at the Hayes Theatre, 19 Greenknowe Avenue until Sunday January 31.