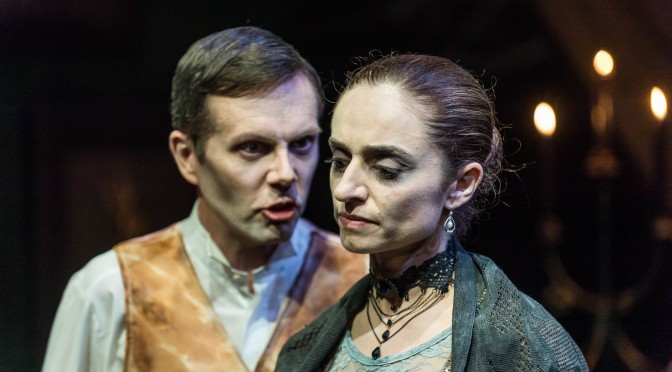 This adaptation by Jack Neary of the classic Edgar Allen Poe short story takes the challenging, haunting tale and re-invents it as a fast-moving 1930’s detective thriller, while still maintaining Poe’s basic story of family treachery and madness.

The play is told as a series of flashbacks as Shaughnessy questions the increasingly troubled Brookfield, strongly portrayed by Ben Freeman, about what actually happened to cause the fire that destroyed the House of Usher leaving two unidentifiably charred bodies in its wake.

Brookfield is invited to the Boston home of his childhood friend, Roderick Usher, played with cold calculating heartlessness by Gavin Jamieson to “chronicle the evolution” of the House of Usher.

This begins for Brookfield as a hopefully pleasant catching up with his old school friends Roderick and twin sister Madeline, hauntingly portrayed as fading victim by Ricarda Emanuel. It turns quickly however into a story of horror as Brookfield slowly discovers Usher’s secret intent, and realises that lives are in terrible danger.

The scene shifts smoothly back and forth, aided by atmospheric lighting, (James Winters), and sound (Paul Sztelma) from the police interrogation room to the Usher mansion as Brookfield recalls and relives the chilling events of the past two weeks.

A lighter note is added by the only remaining servant, Fiona played with great spirit by Christine Wilson who adds her own “speculations” as to the truth of the unfolding story.

This engrossing and entertaining production by Pavilion Players holds one’s interest throughout as it moves relentlessly with a series of twists, aided by Baylee Forbes, to a terrifying conclusion.