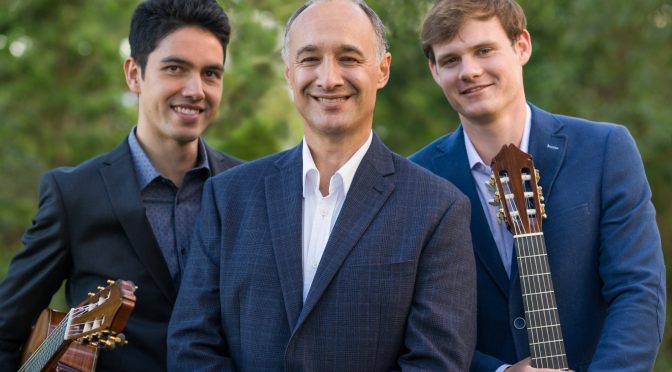 L’Heure Exquise (The Exquisite Hour) presented by the José Carbó Trio is resoundingly successful in answering a question posed by Australia’s leading baritone, José Carbó. What if he were to be accompanied by two guitars instead of the usual piano or even orchestra when singing operatic songs?

Spectacularly, many of the arrangements in this concert were developed in collaboration with two young emerging classical guitarists, Andrew Blanch and Ariel Nurhadi. Together they form the José Carbó Trio. The trio first appeared together on stage at Canberra’s 2015 Voices in the Forest concert, where they performed music from Carbó’s ARIA-nominated album My Latin Heart. The third concert in their current Australian tour was held on 11 March 2018 as part of the Independent Theatre’s popular Prelude in Tea series – which always includes a most generous afternoon tea.

Their recital L’Heure Exquise (The Exquisite Hour), named after Reynaldo Hahn’s masterpiece, features music by Schubert, Faure, Debussy, Verdi and more. Apart from a couple of guitar duos arranged by Pujol and a couple composed specifically for guitar, all trio pieces had been arranged by the members of the José Carbó Trio. The musical arrangements show the thorough reimagining and meticulous work particularly of the guitarists.

Not only is José Carbó one of Australia’s current great operatic talents but he is also one of the most personable and his stage patter makes audiences instantly warm to him. As he sings, even though seated and holding a microphone, his body language and facial expressions add visceral strength to his performance. Whilst the microphone appeared to slightly impede what could have been the unleashing of a freer use of gesture, Jose explained its use was due to the technical requirements inherent in using the guitars which were relatively quiet in accompaniment. He also explained that there were many breaks between songs as retuning was necessary to perfectly match his voice throughout the program.

José Carbó demonstrated that decades after he was first taught Verdi Il povereretto, he was able to deliver it with passion and seasoned resonance.

The guitar duos clearly affirmed Jose’s decision to work with these two stunning young guitarists as they showed virtuosic playing, particularly in Madlem Monte Carlo composed for classical and jazz music guitarists. The light jazz was very well received by the audience. As the concert progressed the guitarists played with apparent increasing ease and close synergistic comfort.

A definite highlight was the Schubert Erlkonig arrangement for the trio. With strong guitar playing and balance with the rich baritone, this dramatic piece was loudly applauded.

The guitars continued to provide a strong complement to the voice after the interval as Jose, Andrew and Ariel led the audience through seven different emotions of an unrequited love in a de Falla piece.

There were many ‘exquisite’ moments in this concert. A big thank you to all three musicians for tackling the question of what would it be like for a baritone to be accompanied by two guitars.

L’Heure Exquise (The Exquisite Hour) has performances throughout 2018 in Manly (March 23), Hunters Hill, Wollongong, Brisbane and Bayview.  With more being added with an aim to record this unique musical setting of baritone and two guitars.