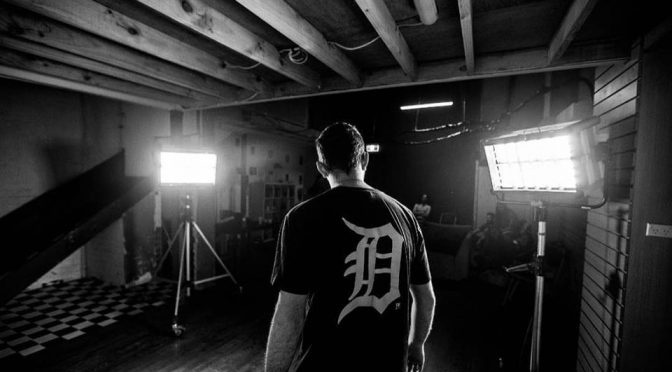 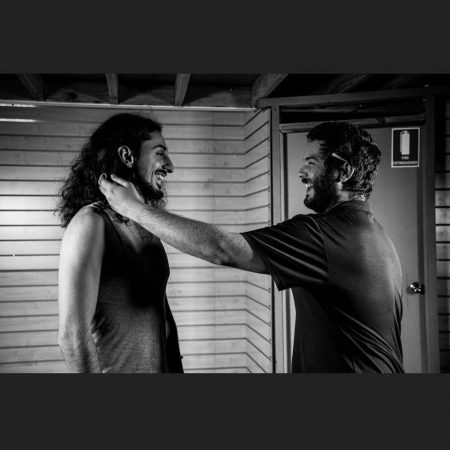 Sometimes the trek into a new venue in support of indie theatre is a futility of over-enthusiastic supportiveness. But this time, not so.  Even for an 8pm show on a Sunday.  There was a “funny feeling in the antlers” when the first of THE EIGHT: REINDEER MONOLOGUES hit the stage at Redfern Acting Studio.   The funny feeling stayed as the cast offered a darkly comic, mysterious and sweetly sad offering.

This 1997 play by Jeff Goode is a straight up character assassination of Santa by those who know him best. Even his supporters have reservations about what has gone on here, no matter how hard they prevaricate on his behalf.  We meet the eight in sequence and the mystery is gradually explained by the reindeer who speak directly, and singly, to us.

Enter Dasher. He’s an aggro bastard. Joseph Frangie lifts the words very well from the page with his beats and phasing character-clear. He also has a deft way with the mystery as it is he who introduces it. He’s not interested in any other side of the story than his own though and this tough buck is not to be argued with.

Cupid on the other hand is funny and has an easy laugh to ease his way into our good graces.  Played with an excellent engagement by Evan Piefke, Cupid does rather take us into the dark with some cringy sexuality and an excruciating, face covering, perversion of happy family. It’s very well done from Piefke who channels his quirky charm in a very entertaining way.

Prancer, Hollywood is his screen name, is a vacuous wanna-be played to perfection as a chatty California blonde type by Liam Walker.   With his spliff and perpetual loop of self-centredness, low empathy and teeth sucking, Walker places him right in the heart of some kind of industry party and implicates us in his chatty airhead ego trip.  Great fun.

Blitzen is a bolshie, jaded, booted, crossed armed creation from Rachel Slee who strides into the space looking for a fight.  Slee uses pause especially well and pitch too when she drops down to the socially conscious conspiratorial. It’s is a particularly clever choice not to play for laughs, to trust in the writing.  It’s appallingly funny in places.

Bad boy reconstructed, Comet is not taking any bullshit about the goings on.  Dominic Di Paulo brings out the true believer in a dispassionate, repressed character with almost zero ambivalent indicators.  Comet is angry as hell… he says so … but too well newly-socialised to show it and that denial of self is explored with subtlety by Di Paulo.

Next we have Dancer, played with an overtly sweet innocence by Helen Shoobert.  Dancer is a storyteller, and Shoobert presents a very well moderated monologue where the story was tweaked by a flighty, slightly perplexed character whose intelligent self-interest is overarching.  Shoobert brought flashes of fire into the blinded nostalgia that keeps arising, and it gives her character a realistic fragility.

Donna is the most conflicted of the eight in an impressive performance by Kat London.  There’s regret tinged with just enough pride to keep self-esteem afloat .  London begins with a conspiratorial tone which gradually becomes a plea for understanding inside the sharing and there is a echoing AA atmosphere in her economy of movement.

Finally we meet the doe who will give us the lowdown.  Or so we think. Vixen is played with pathos and brio by Marcia Lemm.  She is the lost girl, one female voice among many, as her manifestation and expression of sexual politics swings wildly from confidence to disruption. Early on she gives no hints, her guard is up, yet the audience’s instincts scream ‘believe’.  Lemm’s character choices bring a Vixen who might be what other deers see.  Whatever the truth, she is no shrinking violet but the despair reverberates around the room.

It’s a small room in this Redfern space but director Travis McMahon has guided his cast to a very amusing and thought provoking production which has the benefit of playing to the skills of emerging actors.  By nature and training they are often great at monologues, as they are in this fine show.  The next offering from the group is DON’S PARTY, a dialogue heavy, period piece which will put a new set of skills on show.  And I am looking forward to it