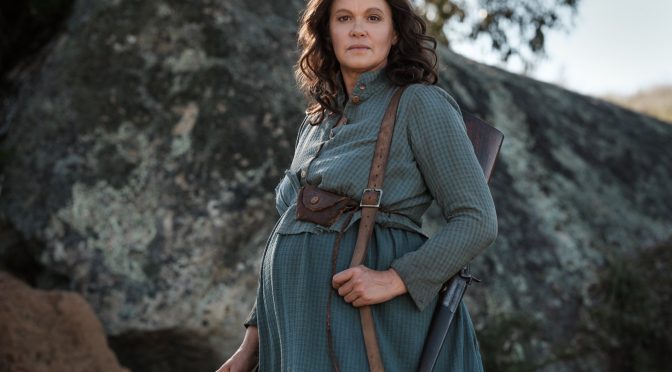 Want to accuse Leah Purcell of cultural appropriation? Go for your life.

Her appropriation of Henry Lawson’s short story, The Drover’s Wife, reworking it, redefining it, into THE DROVER’S WIFE: THE LEGEND OF MOLLY JOHNSON is an entirely appropriate and legitimate adaptation, using Lawson’s short story as a Trojan horse to enter the Australian psyche and shift it.

And shift it she does, like a loose as a goose colon, taking this piece of white literature, turning it upside down, spinning it, and projecting it through the prism of a black woman’s gaze.

Screenwriter, director, lead actress, Leah Purcell has shifted the location to the alpine country, placing this palimpsest of Lawson into the terrain of that other hallowed poet of the era, Banjo Patterson.

It’s a little bit subversive, but THE DROVER’S WIFE: THE LEGEND OF MOLLY JOHNSON is also cinematically traditional, a Western with the whiff of Tarantino. As a tale of courage and resistance it sits firmly with recent Australian triumphs, The Nightingale, Sweet Country and High Ground.

Misogyny, miscegeny, maternal love and murder are the pillars of THE DROVER’S WIFE: THE LEGEND OF MOLLY JOHNSON, with the snake in the woodpile, the stimulus of the source material, superseded by domestic violence and racial prejudice.

Rob Collins as the fugitive, Yadaka, a much nobler imagining than Lawson’s itinerant “black fellow” says he was imprisoned for existing as a black man. It’s a searing statement. This effrontery to the white settlers had lethal consequences to life and culture. Nothing less than savagery disguised as sophistication.

The casting of THE DROVER’S WIFE: THE LEGEND OF MOLLY JOHNSON is impeccable, from Rob Collins to Bruce Spence and Maggie Dence’s sanctimonious siblings, through each of Molly’s kids, and especially notable, Tammy McIntosh as Marti Murray.

The look of the film is also exquisite, with cinematography from Mark Wareham, augmented by the beautiful time-lapse footage, the work of photographic artist, Murray Fredricks.

A fabulous frontier film, THE DROVER’S WIFE: THE LEGEND OF MOLLY JOHNSON is a reconciliation between Australia’s past and present. A gift.