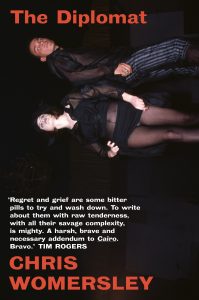 With a title THE DIPLOMAT, you might think THE DIPLOMAT is a political thriller, some sort of far flung foreign intrigue fodder. Think again.

Chris Womersley’s novel, THE DIPLOMAT, a curiously exhilarating and unflinching portrait of low life and high ambition, and vice versa, is named for a flea pit motel in the seedy side of the seaside suburb of St Kilda, the site of the novel’s stacked denouement. The diplomacy of drug deals and the negotiation of narcotics is the politics of the place. Not that THE DIPLOMAT is not thrilling, imbued with an individual and invidious intrigue. It is.

THE DIPLOMAT’s narrator is Edward Degraves, a Melbourne junkie outlaw of art, responsible for the Picasso heist in 86. Back in his hometown after years abroad in Europe and London, literally forging a life in the art world, the recently widowed Degraves wants a detour from his probable path, and he has the powder to pave his way.

If not a sequel exactly of Womersley’s earlier fiction, Cairo, then a return to its world and characters, an addendum. Degraves is a memorable memoirist, but it’s his deceased spouse, Gertrude, who haunts the pages of this occasionally hilarious book. Petite in stature but gigantic in personality, Gertrude is an enduring presence, a ghost who breathes glorious life into the story.

On meeting in a London pub, Lucien Freud instantly developed a crush on her. No surprise in that, states Degraves, she was certainly unusual looking enough for his tastes.

Mixing as it does in the art world, THE DIPLOMAT daubs its narrative with many an acute observation on the state of the arts, circa 1991.

Degraves opines that Painting was on the way out. It was old fashioned conservative; these days it was all installations, things that made no aesthetic sense until you read the artist’s statements. And Artists as self promoters, success was all about positioning yourself in the market. Plus ça change, plus c’est la même chose.

Hopefully we have buried our forelock tugging colonialism as Degraves derides the fact that Quintessential Australians are at once superior to and fawning over our perceived betters. We despised them but craved their approval. This was a cunning cul-de-sac to inhabit and a very depressing truth to acknowledge about ourselves.

Womersley writes all too well about the unravelling mind, those wild dogs of panic, the hounds of terror that haunt the junk yard thoughts of the junkie. Regret and grief, the mundane and the magical, the farcical and the tragic, the realisation that the party had feasted and moved on.

Precise, pungent, pugnacious, anchored in memory and the moment, a story of exile and absence, THE DIPLOMAT is a lean, mean hot shot full of grubby grace, faith, hope and charlatanry.

THE DIPLOMAT by Chris Womersley is published by Picador