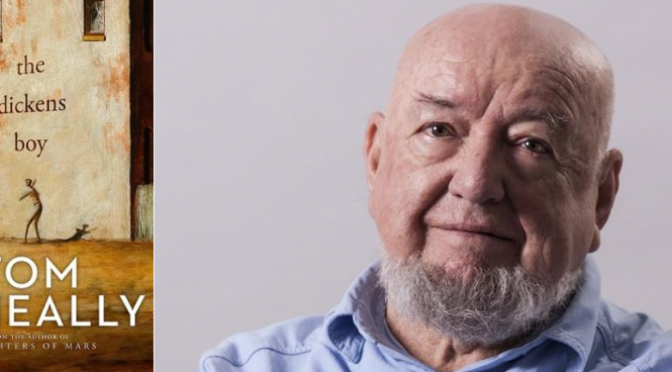 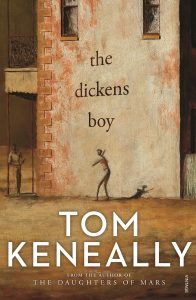 Self isolating is so much more bearable, quarantine countered, with a well told tale, and truth to tell, Tom Keneally’s THE DICKENS BOY is the just the book to quell the quarantine blues.

THE DICKENS BOY has been brewing in Tom Keneally’s imagination for the best part of this century and has finally come to the boil with a richly satisfying narrative full to the brim with incident, character, place and the finest of accessible literary allusion.

THE DICKENS BOY of the title is Edward Lytton Dickens, known as Plorn, the tenth child of Charles Dickens, who, at sixteen, like his brother, Alfred, was sent to Australia to make something of himself.

Something of a reticent, reluctant remittance man, Plorn was the child of grief and consolation after the death of Dicken’s infant daughter, Dora. Nicknamed by his father Mr. Plornishmaroontigoonter, and other variations, “the best nickname any child ever had”, Plorn is unsure he will ever live up to his father’s great expectations of him as a man, especially given that he has not read any of the great man’s books.

Nevertheless, the teenager fully commits to his new colonial existence and by the good guidance of the Bonney Brothers, owners of the Momba Station in Wilcannia, succeeds in making a go of it. In Wilcannia, he is not subject to the accusations arising from algebra but in a country where batting well could liberate a youth from a great deal of aggravation.

“I had escaped the family failure of many of my father’s brothers and even the failings of his father – the same lack of application from which Momba had delivered me” says Plorn as he becomes a jackeroo of many trades.

Cricket, convicts, Colonialists, bushrangers, drovers, shearers, trackers and troopers are part of the rich cavalcade of characters that pepper this rollicking yarn.

“Where would our father’s plots be without death and Australia? The pit at the end of the world you toss useless folk in.”,muses Alfred, and Plorn concurs that the agreeable hostage situation under the bushrangers Pearson and Rutherford, would probably have made their way into a novel by the Guvnor.

There’s no two ways about it, Tom Keneally has captured the tone of Dickens most adroitly delivering in THE DICKENS BOY a tome that can sit side by side with the glorious canon.

Tom Chard the storekeeper at Corona, the property that employs Alfred, and his wife Mrs Chard are as worthy of a Dickens story as the Pickwicks and the Copperfields – “she has this voice modulation which is a little strange, but that is for my sake. She feels I’ve married badly and would love to pass as a stage Englishwoman.” confesses Mr. Chard. And so she went on galloping through thickets of diphthongs, searching – I was sure- for the sound that would not disgrace her husband, and failing at every turn.

She in turn confides, “I’m just keeping him interested with all the pronunciation stuff.”

Plorn is constantly feted throughout the novel as the son of the great man of letters, foreshadowed, overshadowed, so he takes great pleasure that the cook at Corona Station, Mrs. Geraghty, is more a fan of his mother, Catherine. Writing under the nom de plume Lady Maria Clutterbuck, Catherine had written What Shall We Have for Dinner?,and Mrs Geraghty puts more stock in that volume than any Twist or Tale of Two Cities, making a fine Christmas feast to prove it!

In deft Dikensian style, Keneally weaves tales of historical figures and events amongst Plorn’s own adventures examining Australia’s dark history with “the Darks” while running a parallel exploration of family breakdowns and their long lasting legacy.

Keneally lets vivid verbs out of their cage, letting them roam freely and robustly, creating excitement, adventure and more than a dash of sexual intrigue.

“The presence of a lovely woman is an ineffable experience for a man, approximately described in tired language and half-truths, words which fail to penetrate the mystery of human woman, and which actually evade it.”

THE DICKENS BOY lives up to its great expectations, compassionate, funny, sexy. Whether you are a Dickens devotee or not, it is a terrific book to help ameliorate the hard times we are in.

THE DICKENS BOY by Tom Keneally is published by Vintage.