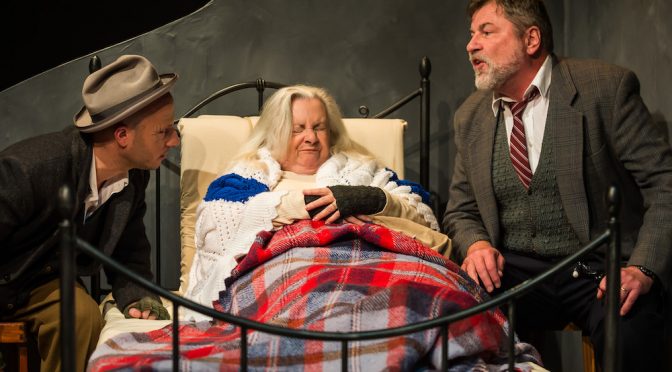 It’s 1934 in the small town of Inishmaan on the Aran Islands off the coast of Ireland. This may be a world far removed from ours but the human condition remains the same. We become immersed as we laugh and cry at the small matters of this village that gain such importance in the lives of these diverse and eccentric characters.

We meet Johnnypateenmike played with much gusto and energy by Dimitri Armatas, the town loudmouth and gossip, who spreads word that a film crew from Hollywood has arrived on the neighbouring island of Inishmore to make a documentary. Billy Claven, played with great sensitivity and feeling by Robert Snars, is a 17-year-old orphan with a physical disability and the butt of the community’s cruel jokes who call him “Cripple Billy”. Billy decides the film will be his escape from the monotony and mean-spiritedness of those around him.

Billy has  been raised by two caring but eccentric sisters, lolly eating Eileen played by Anna Desjardins, and Kate, who talks to stones when stressed, played by Jan Mahoney. They form a wonderfully entertaining duet bouncing words off each other but even they call Billy  “Cripple Billy” and often see him as somewhat of a burden, and are highly pessimistic about his future.

Billy convinces a local boat owner, Babbybobby Bennett, played with quiet strength and initially repressed anger by Jason Spindlow, to back his scheme and transport him to Inishmore to meet the film’s director. However, of course, the path to perceived freedom and fame does not go as planned.

A cast of very colourful characters round out the vision of this small-minded village. There is young Bartley, played by Toby Rowe who earns his share of laughs being obsessed with particular sweeties and telescopes. He is very much dominated by his rough and brutal sister Helen, played with heartless abandon and no regard for anyone but herself  by Aimee Honor-Eltham who considers herself the prettiest girl in Ireland.

I would have loved to see more of the doctor played with excellent touch by Steven Rowe doing his best to tend to the locals with care, and Annette Emerton who played the aging, hard drinking mother of Johnnypateenmike. These two actors complete an accomplished cast.

Set design by Maureen Cartledge transports us most effectively to this other time and place with excellent detail and touches. The lighting design by James Winters directs us to each of the separate sections of the stage as we experience the different parts of the island aided by sound design of Bernard Teuben.

As director, Dave Went’s powerful production of THE CRIPPLE OF INISHMAAN paints a vivid picture, using a mix of humour and dark moments, of an island community who are oppressed by grinding poverty, superstition and history, yet manage to get along and somehow survive. The cast of amazing characters are insensitive and often very unwise, yet are at times, capable of real kindness. It’s not any extraordinary events but the small things that intrigue and frustrate us making us both want to laugh and cry in this excellent production.

I highly recommend a visit to the Pavilion Theatre to see THE CRIPPLE OF INISHMAAN by Martin McDonagh playing from  4-26 June. The theatre is in the Hills Showground, Doran Drive, Castle Hill.