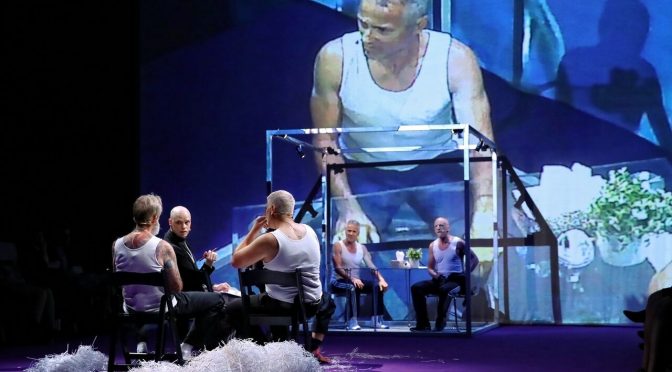 THE CHAT.  As the audience enters the theatre space we are directed to our seats by the performers, a mix of ex-offenders and actors, who chat amongst us till the sound of a shredding machine signifies the start of the show. Les Wiggins has breached parole and a paper copy of his criminal history is shredded as he is to be given an opportunity to show who he truly is and gain his freedom.

In this devised work led by theatre maker and former parole officer, J R Brennan, with writer-performer David Woods, performer Ashley Dye and input from former prisoners, questions around the justice system are raised. Who and how are decisions made around  which offenders should be given parole, what happens if it goes wrong, how does a newly released inmate survive and go on to live a productive life and what supports are needed, are some of the areas considered.

In the not so distant future of the play’s setting the justice system has a new approach – “The Chat” is used in determining if parole will be granted. The centre of the piece is a role playing device, described as a transpersonal, TP, workshop. A parole interview takes place between inmate Les Wiggins and parole officer David Woods. Their roles are reversed and parole is decided by how well the former inmate manages another criminal in similar situation to his.  Serious questions are raised but there is much humour and the audience participates in the parole board’s final decision.

Many elements come together to form this piece including prisoners participating in trust exercises, which, however, go on a little too long becoming rather repetitive, and live close up projections of the inmates which pose questions on surveillance and the loss of privacy. There is a parole offer being trained in the TP process and separate rooms in which an external auditor, Ray, is reviewing the TP process, which was, unfortunately, rather difficult to hear at some points, and another room where parole officers discuss life in the outside world.

This is a fascinating exploration of the justice system that many people have strong views on without perhaps understanding much of the reality of the situation. We are given the opportunity to see below the media hype but in the end does petty bureaucracy still rule our systems?

THE CHAT  continues as part of the Sydney Festival until January 20.