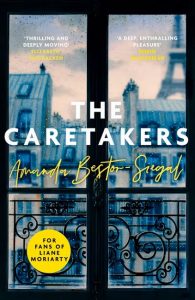 Set in Paris in 2015 and 2016 , this  excellent book by Amanda Bestor-Siegal opens grittily like a sudden TV news alert with the mysterious death of a nine year old French boy, Julien. The family’s American au pair Alena is accused , but is she falsely arraigned – so what really happened?

The book is set in the world of young American au pairs working for rich French families in Paris, in particular the posh , wealthy suburb of Maisons-Larue, before, during and just after the 2016 terrorist attacks.

There are six main character ‘voices ‘we meet, learning about their lives before the incident. The au pairs slip away to the clubs and cafes of the city centre while the rich, embittered wives seek notice from their aloof, seemingly always away husbands and sample revenge.

Fluidly, captivatingly written, it is a story about love , loss and the searching for belonging and completion .We learn about their current lives with their host families , their past histories and current annoyances. Also we hear of horror stories from other au pairs as to how they are treated.

Lou and Alena, the au pairs caught in the maelstrom of events , are burdened with dissension. Geraldine, their marvellous, caring French teacher, often encounters  unconscious racism, being asked if she is a foreigner because of her skin colour. She suffers as her husband Adam has moved to America with their daughter Chloe, who is very much a ‘Daddy’s girl ‘ and  Geraldine is virtually estranged from them.

Then there are the Chauvets – Charlotte, Julien’s mother, who tries to ‘keep up appearances ‘ and is frenemies with her next door neighbour Severine. She has a very strained marriage with her husband Simon. Nathalie ,Charlotte’s teenage daughter , is full of angst and feels like an interloper in Charlotte’s second marriage – everything seems to revolve around Julien, she is not considered , and Charlotte does not allow her to continue her beloved aerial silks classes .

Other au pairs that Alena and Lou talk to as well as they themselves are trying to hide from their previous lives and/or find their real self in France. Alena seems cold and aloof but is really hiding a gaping hole of need. Alena desperately misses her now dead mother Marika.

We also meet Holly and Kelsey who are to a degree involved and the family and children they are au pairs for (Holly loves her host family while Kelsey warns Alena about the Chauvets). But almost all the au pairs feel outsiders and that they don’t fit in.

We learn Alena’s portentous view of events and what actually happened – or is  it?