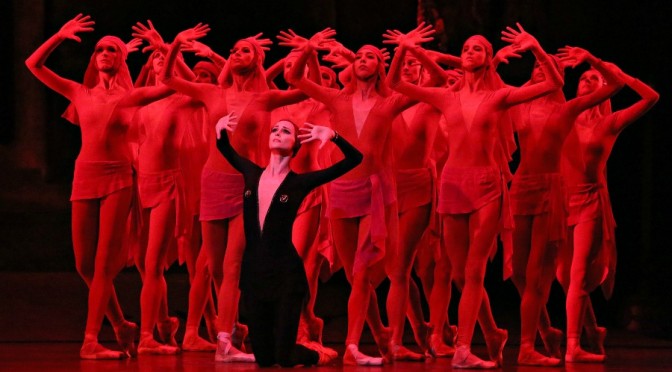 Filmed and performed in the presence of the composer, the Bolshoi Ballet opened its season of seven simulcasts with Yuri Grigorovich’s THE LEGEND OF LOVE. This work was originally performed in 1961 with the legendary cast of Maya Plisetskaya, Marius Liepa, and Natalia Besmertnova in the main roles. In this current production, the principals were Maria Allash , Denis Rodkin, and Anna Nikulina.

This is a once upon a time story full of bold, colourful and  dramatic exoticism. We follow the story of Queen Mekhemene Banu’s (Allash) sister, Princess Shyrin (Nikulina), who lies dying and can only be saved if the Queen sacrifices her beauty to save her sister, with help from a travelling doctor (Evgeny Golovin). Out of a sense of duty, the Queen does this, and then we see that the two sisters fall in love with the same man, the handsome, dashing court painter, Ferkhad (Rodkin), whom they meet as they strolled together through the Palace grounds. Ferkhad and Shyrin fall in love.

Jealous, Queen Mekheme sets Ferkhad an almost impossible task for him and Shyrin to be together. Ferkhad has to establish a water engineering plant in a mountain-– at which he succeeds – but then things end rather clunkily, in approved Soviet fashion, with Mekheme’s beauty restored but neither sister successful as Ferkhad decides to stay at his work at the mountain water plant ‘for the good of the people’.

A standard rather silly story of that era, based on a fairy tale , the sisters and Ferkhad’s moral decisions between duty and love, is at the core of this overdone melodrama.

Technically the dancing is amazing, at times jawdroppingly so, with some very showy solos and incredibly demanding acrobatic lifts in the pas de deux  (shades of Sir Kenneth Macmillan perhaps?!).

Grigorovich’s style is an acquired taste , here with ‘broken wrist ‘ arms as well. It now seems artificial and rather hammy and obviously of its period. Inspired by Persian miniatures, Grigorovich’s choreography for some of corps de ballet/ensemble work is at times frieze like with use of repetition and blocks of movement and intertwining patterns, especially in the   court scenes. Some moments are quite sculptural and you could spot references /similarities to the way that the corps de ballet is handled in Swan Lake and Giselle just to name a few other ballets.

The major colour themes are red and black and there is a box  that unfolds to become assorted palace rooms. The costumes, too, although mostly anchored on coloured unitards, had a Middle Eastern flavor. Shyrin is mostly in white, ethereal and beautiful. Nikulina is sensational , her awakening  solo upon mysteriously recovering, is glorious. She is was tremendous in the pas de deux.

Allash in the Plisetskaya role of Mekhemene is brilliant. For he first Act she wears blue, in the second and third Acts she wears dramatic red and black and a veil to conceal her disfigurement.

She is all flashing ‘speaking ‘eyes and spiky arms, mostly haughty and aloof but we also see her anguish and despair.

Rodkn as Ferkhad is amazing with flying soaring jumps and a powerful presence. He is also a terrific partner. However there is not really that much character development and the ending is a little wishy-washy.

In one of the intervals Rodkin is interviewed. He spoke of his dreams coming true, at just twenty four years of age, to dance in Grigorovich’s ballets, first dancing the lead in Spartacus and now in this work.

He gives us insight into some of the problems of dancing the very demanding choreography by Melikov. He points out as well that there were five artists working on the original production (choreography, music, design, lighting design, and libretto), from five different countries and he acknowledges this in the opening chords of the score. The onstage glimpses of the dancers warming up before each act are fascinating

If you like striking, glorious dancing THE LEGEND FOR LOVE is for you .

Running time – allow about 2 and a half hours including two intervals which feature the interviews.