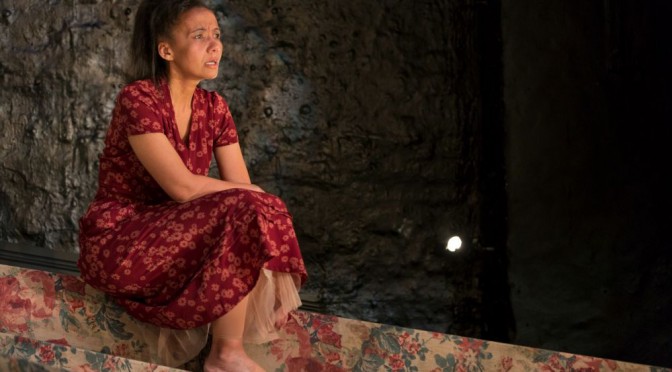 In a dirt-dry town in rural Australia, a shot shatters the still night. A mother and her two daughters have just slain the man of the house with a bullet to the neck. Their dilemma, how do they dispose of the body?!

This is the set up to Melbourne playwright Angus Cerini’s play THE BLEEDING TREE, the 2014 Griffin Award winner, now given its Australian production directed by current Griffin Artistic Director Lee Lewis and starring Paula Arundell as the mother and Shari Sebbens and Airlie Dodds as her two daughters.

Angus Cerini wrote in his note for the program:- ‘It has been enormously enjoyable writing THE BLEEDING TREE. To revel in the downfall of someone who has preyed on others and to envisage a community joining in on that destruction.”

This quote essentially describes what happens in his play.

I really wish I could say that I relished watching this revenge drama play out. The writing was clever, theatrical and poetic, Lee Lewis’ direction tight, the trio of performances excellent, and Renee Mulder’s set was striking and unlike any I had seen at the Stables theatre before.

In  the end, however, this play just didn’t work for me. I felt the gruesome revenge that the trio engage was over-done and it gnawed at me that I didn’t a genuine, fully fleshed out, multi-textured portrait of the perpetrator. Yes he clearly was a monster, but it just felt one dimensional..

I suspect I am in the minority in regards to my response to this play. I can wear that! My failing, perhaps… Over to you now…