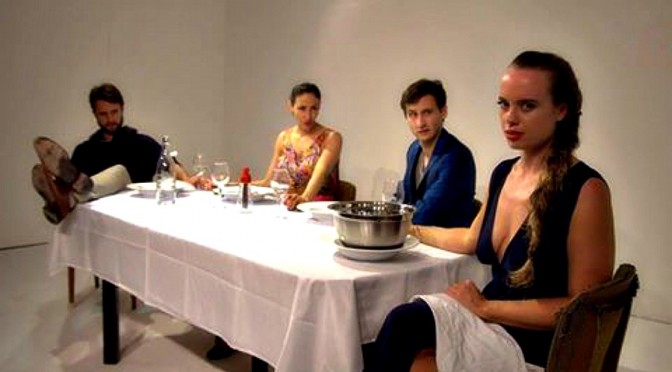 THE BIG FUNK by Pulitzer Prize winning playwright John Patrick Shanley asks what will one choose, love & life over death and neurosis?! The play cuts through our human delusions, striping society to its core and holds up a mirror to the audience to reveal the inner mess and carnage.

Audiences meet each character through a series of monologues, beginning with the self-described “villain” Jill, played with poise by Alixandra Kupcik, a misguided young woman who constantly finds herself in dysfunctional romantic relationships.

Then we are introduced to Fifi, most sweetly portrayed by Jessica Loudon, the subservient wife of disgruntled knife thrower, Omar. Michael Drysdale plays Omar who is  a wonderfully lost soul who must confront his own protective, paternal instincts when he learns that his wife is pregnant with twins.

Then there is the unemployed actor Austin, played by a very capable Jasper Garner-Gore, whose desire is to make a difference in the world by showing a little kindness.

Lastly there is Gregory, cleverly played by Bali Padda, a strange self-absorbed man whose main role is to rub vaseline over Jill.

It is only a matter of time… before Jill must take a bath. The bath scene involving Jill and Austin is tastefully handled by these talented actors and sets the scene for the dinner party that takes place after interval. In  Act 2, the continued strong direction by Michael Dean ensures the  links between incidences in the first and second acts are clear.

Annabel Blackman’s design is very effective in what’s the very little space  available to her in the  tiny downstairs Tap  stage.

At times some audience may find Shanley’s metaphors and philosophical ramblings a little too much but the final scene with Austin delivers his ode to personal salvation will remain long in my memory.

For a larger than life production in the very intimate Tap Gallery space don’t miss this production by the newly formed Suspicious Woman Productions.

For more about The Big Funk, visit http://www.suspiciouswomanproductions.com