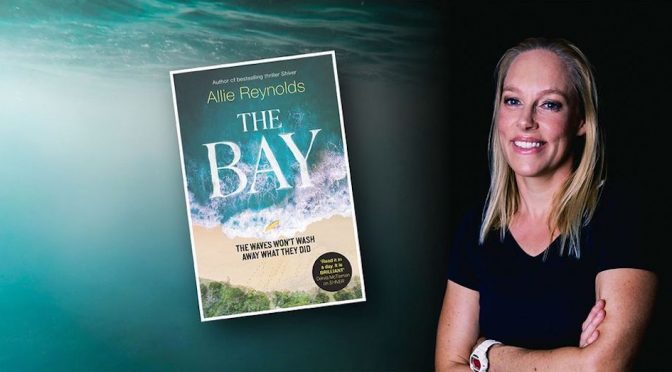 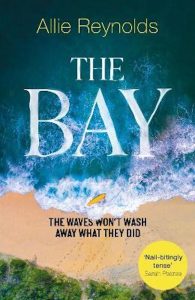 Allie Reynolds’ THE BAY is a classic thriller, a who-done-it where the evil-doer is not revealed until the last few pages. The setting is a remote beach on the east coast of Australia where the waves are perfect. People would die to be able to live by this beach. And die they do! A small group of dedicated surfies live alone in the isolated spot. They keep people away by moving direction signs and bribing the park rangers. They don’t want to be in surfing competitions. They don’t want glory, money or a future. They only want to live in the present, by their beach with the perfect waves, separate from the rest of the word. They’ll do anything to keep their paradise a secret. So when Kenna comes to visit her best friend in Australia, and is invited to go to the this ‘paradise’, there’s trouble.

It’s the classic off-grid hideaway story where a small group protects their remote patch and won’t let anyone else in. When an outsider does find their way to them, people start dying. The most famous of this genre is The Beach by Alex Garland, published in 1996. Set in Thailand, a young backpacker finds an idyllic and isolated beach untouched by tourism but controlled by a small group of young western hippies. The book was so popular that hundreds of tourists and fanatics tried to find the fictional beach. The Thai government finally had to block people from several coastal areas to protect the locals from the horde of the novel’s fans.

THE BAY, by contrast, tells a very local story with plenty of intriguing complicated personal relationships and psychological backstories. At the beginning of the novel, there is a sense that the story is plausible. Yes, these seven people could probably live off-grid and remain peaceful and companionable. But once Kenna joins them, there are so many plot complications and so many murders that the story becomes implausible, a fantasy thriller in a familiar coastal setting. It’s a wonderful page-turner to read on the beach. One of the publicity blurbs for The Bay is ‘Read it in a day. It is brilliant.’ Yes, it’s a good day’s read, forgotten tomorrow. If only that had been a bit more depth and fewer murders.

Allie Reynolds was born and raised in the UK. She became a professional snowboarder competing in Europe and Canada. When Allie moved to Queensland in 2004 she swapped her snowboard for a surfboard. Her first novel, Shiver, has been translated into 23 languages. THE BAY is her second novel.