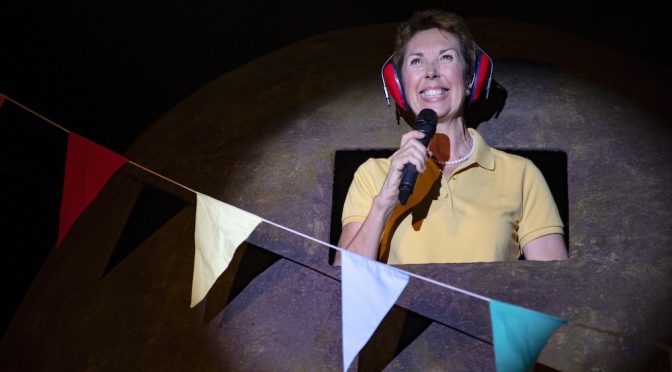 It would be a spoiler to reveal what the play is about, other than the rural town’s women are organising a race where they lug a 20 kilo sack of potatoes around the track as an event in the annual potato festival. Once the play’s set-up is sprung early in the show, events unfold in a predictable way. You know what’s going to happen but the fun is the quirkily twisted journey to the end of the story.

Playwright Melanie Tait and Director Priscilla Jackman have crafted a believable town with five characters. The town’s history, the people, the joys and the heartache are revealed by good stagecraft.  At times the characters sit quietly on stage and address the audience in a short monologue revealing their personal lives, away from the confusion of the planning for the race. It’s a race for life for some of the characters. These are the ups and downs of everyday life whether in a small town or a city. These personal stories could be anywhere.

The play’s construction is reminiscent of Thornton Wilder’s Our Town where characters in a rural town reveal themselves while alone on stage. It’s clever writing to make these monologues segue neatly back into the action story.

Michael Scott-Mitchel’s set was appropriately sparse. A large tilted and battered ute is stage centre. With seats in the back, the ute becomes a sports stand, shelves for potatoes and seats for quiet contemplation.

An Ensemble Theatre Company production, THE APPLETON LADIES POTATO RACE is playing the Glen Street Theatre, Belrose until the 16th May,2021.

The show then races off to Warrnambool, Bathurst, Orange, Wagga Wagga, Tamworth, Canberra, Penrith,  Mackay and finally Townsville. It must have been quite a journey to craft this touching story and it’ll be quite a race to the end of the tour. Best wishes for the journey all the way up to Townsville.