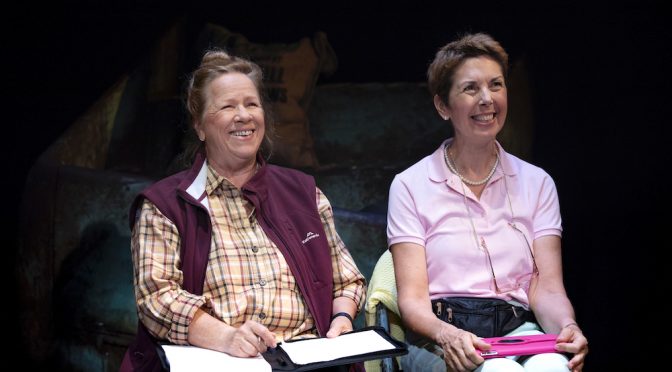 Some small communities and groups hang on tightly to traditions, fearing severe fracture and chaos if they let go. In THE APPLETON LADIES’ POTATO RACE we see one such town having the rules of its annual community highlight challenged by the return of one of its own.

The opening scene of an old rusty ute holding a large sack of potatoes immediately takes the audience to a rural potato growing town.The committee is organising the annual potato race. Whilst apparently there are men on the committee, they are absent. In fact, the only men present in the play are a few male voices on the Appleton radio broadcast talk back. The broadcast is a clever technique monitoring the community feel about unfolding rumour and events. It’s all left up to conservative Bev, Valerie Bader, and Barb, Merridy Eastman. Barb has a rebellious streak which is suppressed to fit in with the town. Rania, Sapidah Kian, a Syrian refugee also has bigger ideas, but she wants to fit in to thank her new country.

The next generation of Appleton locals appears as the beloved Nikki, Amber McMahon. This hairdresser, bar worker and footy mum is the latest hope for winning the Ladies Race. Nikki’s childhood friend and cousin, Penny, Sharon Millerchip, returns to town as the local GP, after years in the city. Penny has just had a breakup with her female partner and returned home. She is horrified to find out that the prize money for the potato race varies according to gender and the play revolves around her attempts to gain equal payment.

The opposing poles of rejection and acceptance against principles of equality and nature make this simple annual potato race an absorbing 90 minutes. It is done with lots of laughs and charm. Through the humour, one universal appeal of this play is in identifying as being a misfit in a small community and asking, as Penny does, if we go back, can we make it better? Through social media funding we see that despite different customs, generations, politics and geography that there are human causes that appeal across the globe.

Broadcaster, Author and Playwright Melanie Tait’s play was inspired by true events. The strong cast honours Priscilla Jackman’s direction. Michael Scott-Mitchell provided a distilled set design around which movement and the delightful choreography of the young Nikki and Penny at the race in 1988 could delight.

Genevieve Graham and Margaret Gill produced a wondrous joyous costume for the final race call. Tegan Nicholls ensured through sound that we were present in small town Appleton. The whole cast and crew made one think about adding an Appleton to our next holiday road trip.

Previously performed in 2019 at The Ensemble, after the Riverside, the brief season ends on Saturday 8th May, the show will tour around twelve other towns and cities in the eastern states and ACT over the next 6 weeks. The next stop is Glen Street Theatre 13th -16th May, 2021.

This is a race definitely worth the run!