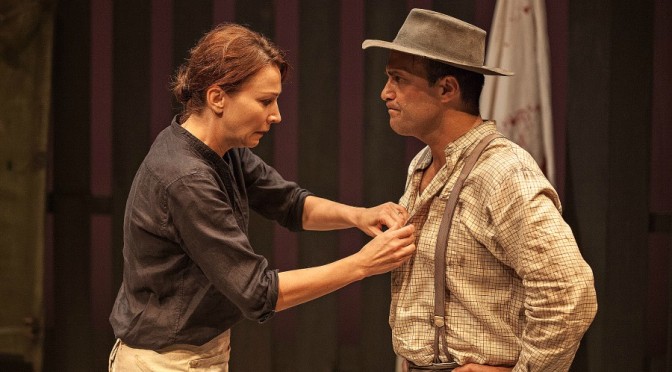 As part of this year’s 100th anniversary of the Australian and New Zealand troops landing on the Gallipoli Peninsula in an offensive against the Turkish Army during World War 1, the Ensemble Theatre  has developed and is now presenting its production, THE ANZAC PROJECT- HELPING US REMEMBER.

As we all know only too painfully, the campaign was a disastrous one. The troops were largely cannon fodder but the camaraderie, sardonic humour and bravery of the Australian and New Zealand forces launched a legend, henceforth known as the ANZACS that continues to be recognised every 25th April since 1916.

The two new works, commissioned by the Ensemble Theatre for their 2015 season, and written by experienced playwrights Geoffrey Atherton and Vanessa Bates, have many overlaps and similarities in style and content. With them being presented by the same quartet of actors playing quite similar characters, and both directed by Mark Kilmurry, using the same set, there tends to be a blurring of stories and images into one whole.

Both have memorabilia as their starting point – a letter from a WW1 soldier and some medals for Atherton’s DEAR MUM AND DAD and a whistle for Bates’ LIGHTS BEGIN TO FADE. We swing from past to the present with the actors playing an array of characters with rapid transformation and shifts in time and place.

This is all capably and expertly managed by the talented and credentialed cast of four, Eric Beecroft, Anita Hegh, Amy Mathews and David Terry. Verity Hampson’s lighting design and Daryl Willis’ sound design also keep us on track in terms of time and place, keeping the audience in the moment and on task.

It’s just really hard to remember it all. Impressions are what remain – images and moments of focus and heart, plus a strong underlying theme of deception, secrets and heartache.

Letters home are censored and memories could be fever dreaming. What was behind the British disregard for the Australian troops? Who killed the person on the soccer oval? Did he marry the girl back home?

And the sorrow. The grieving mother whose sons have become sacrificial lambs like the ones in the paddock, carnage and massacre on the Gallipoli landing, the plight of irreparably physically and mentally damaged returned soldiers. White feathers.

Atherton’s DEAR MUM AND DAD does have the stylistic distinction of being very reminiscent of Theatre in Education (TIE). Its use of old fashioned jokes, stock characters, references to CJ Dennis and simple set changes managed by a cast of 2 men and 2 women using transformational acting, hurtled me back to the 80’s and 90’s when TIE companies travelled around in vans and set up in all manner of venues and spaces. It felt like a teaching resource with the stilted, didactic manner of an entertaining and informative show designed to fit in the 60 minute timeslot, including student interaction. Even Kilmurry’s set of ragged palings and a few chairs could be easily adapted for transportation.

Bates’ THE LIGHT BEGINS TO FADE has a smoother and more contemporary approach and at times borders on black comedy. The old axiom that you have to make them laugh in order to make them cry applies in this piece as she satirises her own kind – scriptwriters. A group of TV writers are tasked with bringing the Gallipoli story to a contemporary audience and the joke is on them. Whether the piece of memorabilia they are using as their starting point is genuine or not really does not matter and, apparently “There are no bad ideas”.

Her writing is more lyrical, at times poetic, and the actors become more fluid and relaxed in this dense work. References to modern day Iran and Iraq are woven in with Orwellian “Sport is War” mothers on the soccer field and the mystery of a single dead body on the oval. This contrasts with the highly atmospheric and evocative representation of the ANZAC troops rowing forth to almost certain death and landing on the beach of the Gallipoli Peninsula to be massacred in their thousands.

It also reinforces that when it comes to telling these stories, the less naturalistic approach can paradoxically be far more powerful and real.

Bates strikes the right balance between satire and nightmarish horror. Once you start exploring these stories you can never escape the depth of grief and enormity of pain and sacrifice experienced by soldiers and their families during WW1. The contrast with 21st century media machines somehow makes it even more powerful.

If in the lead up to April 25 2015 you feel the need to inform yourself or become reminded of some of the details of the events and attitudes of the times, then the Ensemble’s ANZAC Project is a handy project to view. Even if you do struggle to keep the two plays separate, you will come away with a strong sense of the dilemmas faced by soldiers, nurses and families during times of conflict and war. And with even more respect for the great ANZAC Day tradition.

THE ANZAC PROJECT- HELPING US REMEMBER opened at the Ensemble Theatre, 78 McDougall Street, Kirribilli on Thursday 9th April and runs until Saturday 9th May.