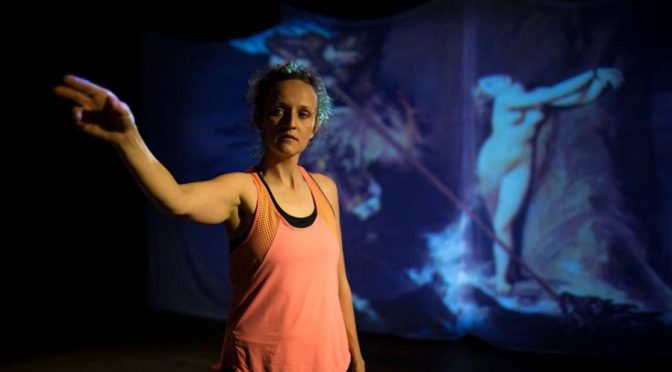 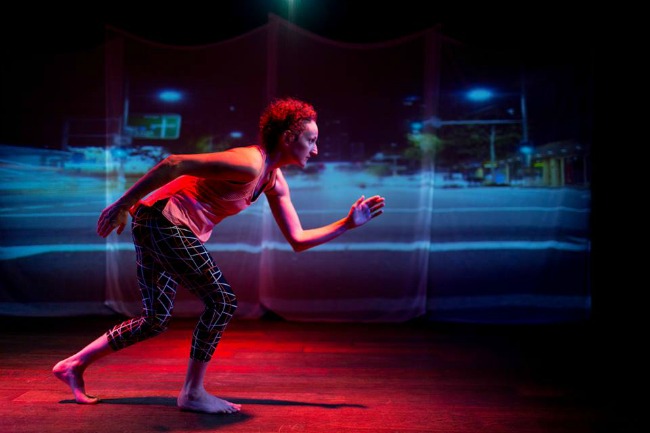 So I sit here at the laptop completely out of my depth. It doesn’t happen often but when it hits I feel useless. Last night’s show THE ANGELICA COMPLEX playing as part of Invisible Circus at King’s Cross Theatre has my writer’s brain in a mess. To explain the complexity: this show was not for me. More accurately perhaps, I was not for it. It was not a show that I took to, or enjoyed or would want to see again but for some readers it will be required attendance. I am sending my BFF to it on Saturday.

THE ANGELICA COMPLEX is about motherhood. The protagonist is Angelica and we learn quickly that she is somewhere for ‘punishment’ or ‘respite’ and it has something to do with her baby. And that the answers lie hidden inside herself. There are 3 selves there in fact. Angelica speaks directly to us of her experiences and we see her in closeup facilitated by the live camera feed operator, plus we hear an inner voice in the opera singing of another figure on the stage.

It has been my experience when supporting friends tackling motherhood that it is an all-encompassing, vocational event and this show is exactly that. With what I understand to be postpartum depression as the structure, it unrelentingly explores the theme, early on through the cynicism of received perfection and later in a microcosm of narrative when it’s just Angelica and her baby.

As an audience I find it hard to be involved in the former but riveted by the latter and judging from the squirming of the young men in my row and the older man beside me, I am not alone. Yet in the moments when the content and concepts simply go over my head, I am obsessed by the faces of the women in the seating on the opposite side of the stage. They nod, smile and are responsively sad, joyful, reflective.

It is a show written to reflect not inform.

And it has a terrifically well created performance from KYM VERCOE as a kind of self-reflective anti-everywoman. Vercoe’s Angelica is fully formed. She engages the audience with ease, has excellent command of voice and emotion and endows Angelica with a conflicted yet not capricious search for inner peace.

Director and Co-creator PRISCILLA JACKMAN has foregrounded Vercoe’s exceptional physicality. She jumps and leans and bounces . She shreds at a Mountain, Tree or Warrior Pose and after a little settling she brings out the humour of the piece. Modern obsessions with selfies and MILFs are something everyone can relate to and can laugh at a wittily constructed, beautifully thrown comic line.

And can she dance!

There are several little interludes in the 45 minute show co-created and written by SUNNY GRACE , the fantastically choreographed and danced disco sequence being one of them. Often using a projection on the 4 white drops at each end of the stage these interludes do give some respite from the theme. The shark/whale sequence was evocative and the possibility of it actually being about drowning was eerie.

The recorded video was really well done. Nice washed out colour palette to match the soft white lighting but the sudden interjection of the camera and tripod for the live close-ups was disruptive when a recorded shot would have done. For me, the inclusion of the live feed artist (LUCIA MAY) or the opera singer (NAOMI LIVINGSTON) did not add to the text despite the fact that both artists are unobtrusive but involved when not actively participating. They both have acting creds in their bio and it shows. The initial concept of opera singing and baby crying made me very uneasy but some of the symbolism did work well. As an audience member ambivalent about the production, putting motherhood on a plinth at the finale really made me examine why I had disengaged. It was very clever.

The thriller aspect of the text was also clever and the section of the piece where the narrative become predominant I did actually respond to. One is pulled into her story not just her emotions. I was compelled to concentrate because of the mystery engendered by the writing. The aforementioned mature man sitting next to me did have to ask me what happened though, he was long gone and had missed the climax.

So the show wasn’t for him either but he, like me is probably sending someone he knows to it.