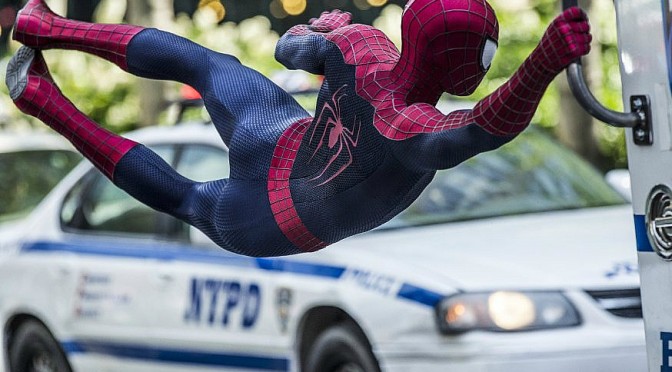 THE AMAZING SPIDER-MAN 2- RISE OF ELECTRO is a gripping sequel that is just so much better and tighter than the first re-boot of the franchise, THE AMAZING SPIDERMAN. At times, the tone is quite dark, with stunning detailed visuals and non-stop action fight sequences as Spider Man battles with multiple villains, starting with Electro/Max Dillon (Jamie Foxx), and including Harry Osborn (Dane DeHaan in a standout performance) of Oscorp as the main antagonist.

This villain Electro, is the combination of two characters from the classic Marvel Comics Universe; mild mannered Maxwell Dillon who acquires superpowers in an accident and goes insanely villainous, and a leather clad super villain from the Marvel Comics ‘Ultimate Universe’. Interestingly, the filmmakers have re-interpreted and deviated from the source material. Look for Gwen Stacy clothed in a mint coloured coat plus purple skirt, referencing the controversial comic titled “Night That Gwen Stacy Died” story arc.

The audience is so consistently entertained that we fail to realise that this SPIDERMAN sequel has just flown by, despite the longest running time of 142 minutes.

In this latest sequel, Spider Man must yet again protect New Yorkers from the formidable villains that threaten NYC. This time there are real deep and meaningful emotional challenges, seen in the on-screen romance between Spider Man/Peter Parker (Andrew Garfield) and Gwen Stacy (Emma Stone). in an interview made before the release of the movie, Emma Stone said, ‘Gwen saves Spider-Man more (often, than he saves her. Gwen’s incredibly helpful to Spider-Man…’

Despite being a Computer Graphics driven movie, the film was shot entirely in New York USA, and now is the largest film production ever shot in New York and New York City.

It is recommended that cinemagoers get to see the 3D cinema version, even better the IMAX 3D version. The director has very deliberately adjusted the focus, so that you concentrate only on the one part of the screen important to progressing the storyline. Such visual direction is very reminiscent of Martin Scorsese’s HUGO (2011) and Alfred Hitchcock’s 1954 one and only 3D visual masterpiece, DIAL M FOR MURDER”.

THE AMAZING SPIDER-MAN 2 opens nationally on the 17th April.

2 thoughts on “THE AMAZING SPIDERMAN 2”